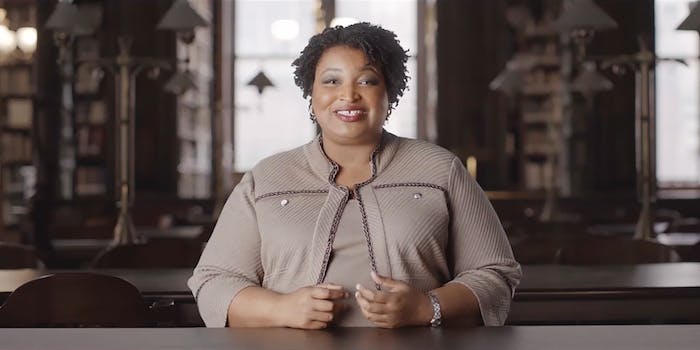 The documentary from directors Liz Garbus and Lisa Cortés is more relevant than ever.

With more than 98% of the votes tallied, President-elect Joe Biden is leading the state of Georgia by more than 14,000 votes, which cements his Electoral College tally at 306 votes. The ballot recount currently being done across the state doesn’t seem like it’ll change the tally by much. For some, Georgia turning blue and allotting its 16 Electoral College votes to the Democratic presidential candidate for the first time in nearly 30 years (the last time was the 1992 presidential election) is a major shock.

But for many others, it’s not that much of a surprise; it’s a shift that’s been in the works for years. It’s thanks in large part to the work of Stacey Abrams (who reached the national stage during her 2018 gubernatorial race in Georgia) and several other voting rights activists, who’ve spent the better part of a decade building and supporting programs with the goal of getting more people registered to vote in a state with a long history of voter suppression.

Even as Abrams and other organizers set their sights on the two Georgia Senate runoff races, the fallout from the 2020 election continues. Donald Trump is refusing to concede the election as he and the Republican Party share conspiracy theories and disinformation about voter fraud. Through lawsuits in several swing states that Biden won, Trump’s lawyers are attempting to disenfranchise voters who mailed in their ballots and stop counting ballots, which so far has been unsuccessful. Several Trump allies are claiming, despite the indisputable fact that their candidate lost, that Trump will still be sworn in for a second term on Jan. 20, 2021.

“When elected officials feel they may not have the power anymore, they have two choices,” Abrams explains in All-In: The Fight for Democracy. “They can either be more responsive to those they lead, or they can eliminate the people they have to answer to.”

All-In, Amazon Studios’ documentary on the history of voter suppression, has already been available to stream on Amazon Prime for a couple of months now. With the 2020 election in view, co-directors Liz Garbus and Lisa Cortés’ documentary interweaves two vast stories together with a message that doesn’t have an expiration date.

“One of the first big stories after we locked [picture on the film] was the Postal Service debacle and Trump’s suspicions that they were messing with the Postal Service in order to affect the mail-in ballots,” Garbus told Indiewire. “People said, ‘Aren’t you worried that this isn’t in your film?’ I wasn’t. It’s the same old story being told with a different tune: power trying to cling desperately to itself by disenfranchising people rather than including them or creating a platform that’s appealing to them. And it’s going to happen in Georgia again. I believe the film is up to date without the latest news breaks.”

With Georgia’s runoff elections about to determine what direction the U.S. will take, it’s never been a better time to familiarize yourself with this particular stain on U.S. history that still persists on nearly every government level to this day.

One story, complete with interviews from experts, document, and news footage, relays the long and often bloody history of voter suppression and the efforts to fight back against it. Taking viewers from the U.S.’s first days all the way up to present-day, All-In argues that voter suppression is an inherently American ideal that’s embedded within the fabric of the Constitution. The Electoral College’s original design was to give more power to white slave owners in the south and only white men who owned property could vote in elections.

Several constitutional amendments, including the 15th (which gave all men regardless of race the right to vote), 19th (which gave women the right to vote), 24th (which eliminated poll taxes), and the 26th (which lowered the voting age to 18) expanded voting rights—at least in theory. But in the years after Reconstruction in the south, white supremacist lawmakers made it harder for Black people to vote through voter intimidation tactics, poll taxes, literacy tests, and lynching people who did vote. Despite giving women the right to vote in 1920, it took decades for the 19th amendment to truly apply to all women; until the Voting Rights Act passed, it mostly only benefited white women. Despite poll taxes being unconstitutional, the 11th Circuit recently reversed course and upheld a law that allowed the state to bar ex-felons (who had their right to vote restored in 2018) from voting until they paid off all of their court fines and fees.

The second story is a far more personal one as it chronicles decades of activism from Abrams, who spoke at the 1993 March on Washington while she was a junior at Spelman College, and the injustices of voter suppression she witnessed, leading all the way to Abrams’ 2018 campaign. Abrams narrowly lost to then-Secretary of State Brian Kemp, who came under fire for refusing to recuse himself while running for governor and purging hundreds of thousands of voters from Georgia’s voter registry. When Election Day arrived in Georgia in 2018, Kemp had trouble voting while Abrams was initially told that she requested an absentee ballot—and because of that, she couldn’t vote in-person.

By the time Abrams gave a non-concession concession speech—following several days and federal judges forcing Georgia to continue to count ballots—for an election rife with issues, the fury that comes with watching it is palpable. Some of the information surrounding widespread voter suppression might not be new, but it’s still infuriating to watch it all unfold. In that speech, Abrams acknowledged that while Kemp would be the next governor, she also noted that “I will not concede because the erosion of our democracy is not right.” She also launched Fair Fight Georgia, which planned to “pursue accountability in Georgia’s elections and integrity in the process of maintaining our voting rolls.”

Two years later, Fair Fight was one of the organizations responsible for registering more than 800,000 Georgians to vote. It likely helped Georgia turn blue for Biden—and yes, Abrams celebrated. But now she’s got bigger fish to fry in Georgia.

“I had about 17 minutes [to celebrate Biden’s victory]… I’m good,” she told Stephen Colbert on The Tonight Show. “Now I get back to work. We got to win two Senate races, I can’t dawdle too long.”

All-In: The Fight for Democracy is now streaming on Amazon Prime Video.