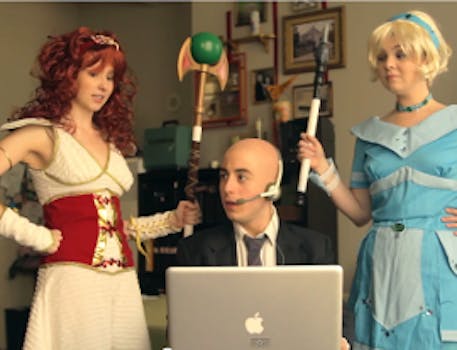 “Squaresville” shows off its nerd cred in fandom parody episode

Comedy webseries hits everything from Adventure Time to Doctor Who in cosplaying episode.

The deadpan teens of Squaresville, Matt Enlow’s award-winning comedy webseries, don’t often let their geek flags fly, but when they do, they remind us how much fun it is to be giant nerds.

In the latest episode, stars Mary Kate Wiles, Kylie Sparks, and Austin Rogers took on a whirlwind of popular fandom parodies, all with hilarious nerd cosplay. They also pointed out that geek culture can encompass a wide variety of subjects, from beloved PBS painter Bob Ross to Woody Allen.

It’s a nice moment of levity for the show, which looks at friendship and coming of age in Boresville, USA. Currently in its second season, the show has had some tough moments, including fights between friends, makeups, rocky relationships, and breakups. In the last episode, Wiles, who gained fame as Lydia on the just-concluded Lizzie Bennet Diaries, made the decision to end things with her delinquent boyfriend.

But in episode 21, she’s all smiles as she, Sparks, and Rogers wing their way through numerous parodies, including Harry Potter, The Guild, Adventure Time, Doctor Who, and Sherlock. There’s even a Star Trek fight with the Gorn and an expendable crewman.

Enjoy the whole episode below:

You can catch up on Squaresville from the beginning right here.