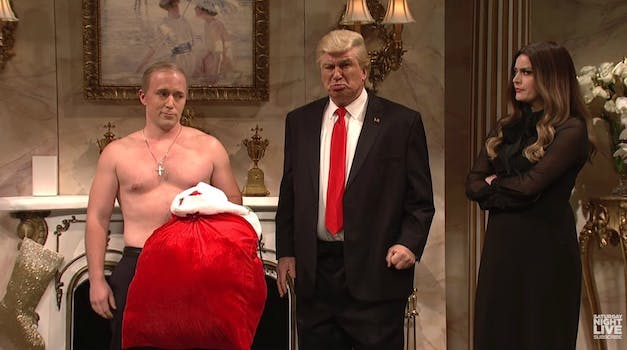 Putin reunites with an old friend.

On Saturday morning, Alec Baldwin teased his return as President-elect Donald Trump on this week’s edition of Saturday Night Live.

And there he was in the cold open with Kate McKinnon as senior adviser Kellyanne Conway discussing another Trump Cabinet pick and who will perform at his inauguration.

Then, a noise emanates from the chimney, but it isn’t Santa Claus who appears. And you’ll never guess who emerges shirtless from that chimney (actually, you probably will). Watch what happens next.

We already knew Secretary of State nominee Rex Tillerson, as played by John Goodman, and Vladimir Putin were buddies. But we didn’t know they were this close.