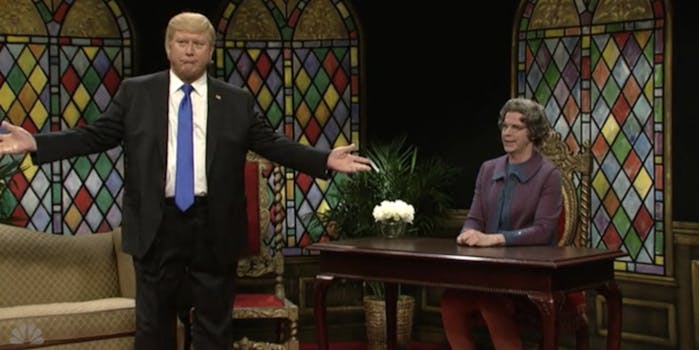 The ‘SNL’ Church Lady sits down with Donald Trump

If the current state of the GOP doesn’t have you praying already, Saturday Night Live‘s “Church Lady” open might inspire you yet.

Dana Carvey reprised his iconic role, sitting down with recent race dropout Ted Cruz and Republican presidential nominee Donald Trump (along with his harem of ladies).

Even a “Lucifer in the flesh” like Cruz is a little too religious for the devout Church Lady. To Carvey’s character, Cruz is just a tad “preachy.” She quickly reveals her skepticism over whether or not it was truly God’s plan for the quitter to get humiliated. Certainly, the lord works in mysterious ways.

Soon after, the “Tangerine Tornado” known as Trump pops in for some Bible chat. Turns out his favorite books in the Holy Scripture include “2 Genesis 2 Furious” and the part where Jon Snow comes back to life. Hey, that’s one thing we can agree with Trump on.

And if Trump’s awful enough to scare off Satan back to the depths of hell, we’re all screwed if he wins.