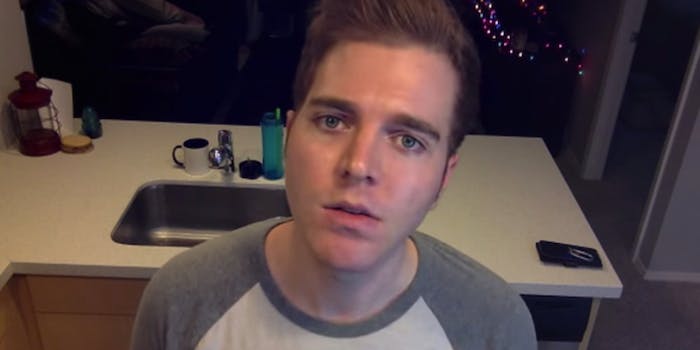 Tweets can be deleted, but ignorance is forever.

When we last left YouTube star Shane Dawson, he was being called out by fellow YouTuber Franchesca Ramsey for doing blackface in past YouTube videos and suffering no repercussions from the community. Dawson apologized—but not before he got a few condescending jabs in at critics.

Some YouTubers, in the wake of controversy, retreat from social media and reexamine their life choices. Dawson is not one of them. 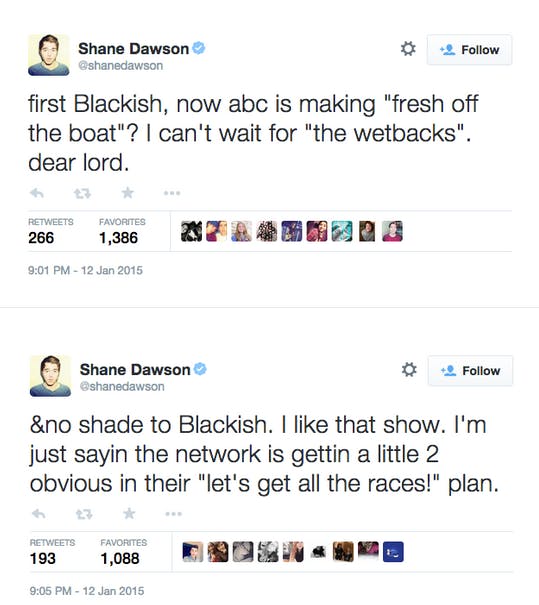 The tweets quickly disappeared, but he left this poor-me tweet up, so his fans could still enjoy his “opinions” off Twitter.

I'm done sharing my opinions on here. if u want to hear them they will be on my podcast http://t.co/8wyQdCLJKK peace

Dawson is part of the growing, often toxic YouTube subculture of prank videos, often called “social experiments” to minimize personal responsibility and maximize traffic. His 2014 movie, Not Cool, did not find much critical acclaim. The Hollywood Reporter’s review pointed out it’s “[filled] with ethnic stereotypes, scatological humor, profane language and characters who are not so much caricatures as cartoons.” Dawson’s also known for his “ghetto girl” character, Shanaynay, and engaging in uncomfortable “ghetto pranks” onstage at VidCon.

Shane Dawson… The same Shane Dawson who’s been painting his face brown for bout 10 years wants to comment on the diversification of TV? ?

Shane Dawson clearly sees white as the default. So of course a show that doesn’t center whiteness is going to offend him.

Nevermind that ABC is one of the few prime-time channels attempting to diversify television. ABC’s head of programming told the New York Times last year, “We did go out with a mission this year to reflect America.” Apparently that’s not Shane Dawson’s America, and now he’s basically the uncle no one wants to get into a political discussion with at Thanksgiving.

If you want to get familiar more with what Dawson considers entertainment, just take a look at his latest video.