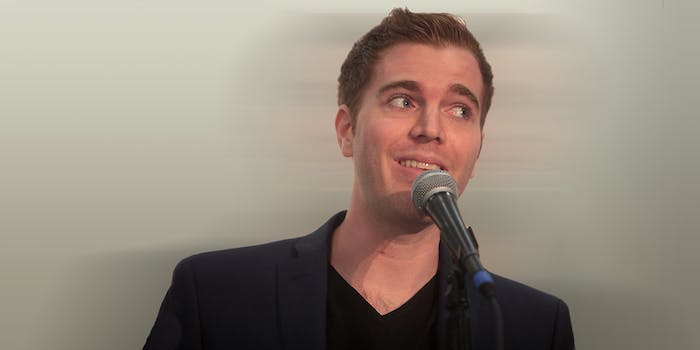 A YouTuber wore blackface in old videos, and the community is furious

In the wake of YouTube’s Sam Pepper controversy, viewers are calling out other YouTubers on the questionable content of their videos. One such YouTuber is Shane Dawson, who reaches more than 6 million subscribers and has, in the past, painted his face black to portray African-American characters.

Twitter user OhDionne called Dawson out on his history of blackface and wrote about the exchange on her Tumblr. Another post shows an exchange where Dawson defends his use of blackface when portraying talk show host Wendy Williams. Dawson responded on Twitter that the screencaps of him in blackface were from old videos years ago that he has removed from his official channel and for which he has subsequently apologized.

@OhDionne i took them down a long time ago. all the screencaps are from forever ago. ive already apologized. ive done all i can.

However, there are still videos on his official channel of him playing a “ghetto” character named Shanaynay, and in scenes of the video a woman playing a “scared white mom” says “I’ve seen Tyler Perry movies; I know what black people do.” With or without the face paint, Dawson’s video could still be perceived as perpetuating racial stereotypes.

The controversy hits Dawson just as his film, Not Cool, hits theaters with less than positive reviews. The L.A. Times described the film as “a waste of time” and a “stab—no, a frantic machete swipe—at comedy that only date-rapists, racists and sociopaths could love.” The film “begins with rapid-fire gags about overweight, undersexed losers; coitus with vegetables; loose bowels, rivers of puke and slut-shaming. And the film finds a way to tumble downhill from there.”

Angry viewers have called for an apology from Dawson, and for the YouTube community as a whole to be as sensitive to racial issues as they are to misogyny and homophobia. As Tumblr user chescaleigh writes:

Sam was banned from Vidcon over ONE video. Shane has done his modern day minstrel show act AT VIDCON and faced no repercussions. It’d be nice if he’d acknowledge why these thing are problematic, apologize to his audience and stop doing them. …

Start the conversation about why this isn’t ok. Normalizing racism has serious consequences, the same way sexism and homophobia have consequences. Unfortunately the majority of the YouTube audience isn’t going to listen or care unless it comes from a high profile (ahem WHITE) content creator.