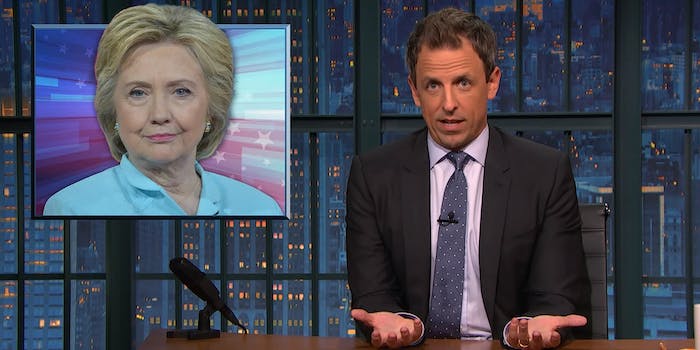 But there's a big reason it's not harming her more.

Hillary Clinton’s latest batch of released emails reveal the State Department granted donors access, but Seth Meyers demonstrates that the rhetoric within them sounds more like a famous TV show than that of a federal government.

Leading off with a focus group’s distaste for Donald Trump and how much Trump’s own campaign is turning potential voters away, all Clinton has to do is basically stay the course. Except her private email server keeps popping up. Many of her emails aren’t of interest, but language from the emails like “favor,” “important to take care of,” and “good friend of ours” seemed lifted from The Sopranos.

While he highlights some of the emails, including a request for Bono concerts to be played in the International Space Station, he has a bigger point to make. In most presidential elections, this would be more damaging than it is.

“In any other year, all of this would be so much more politically damaging to Hillary,” he said. “It just so happened that this year, she’s running against a candidate who is, according to voters, ‘running as a 12-year-old.’”