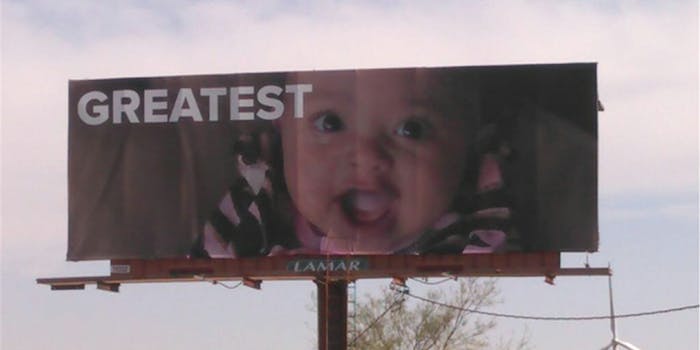 This man is precious.

Serena Williams just had a baby girl, and her husband wants to shout it from the rooftops—or billboards.

Alexis Ohanian, Williams’ husband and father of the couple’s daughter, put up four billboards on a highway near Palm Springs, California, to “welcome her to back tennis” this month. In his Instagram post and on the billboards, Ohanian calls Williams the “#G.M.O.A.T.,” or “Greatest Momma Of All Time.”

These just went up on I-10 into Palm Springs. @olympiaohanian & I wanted to welcome her back to tennis. Designed them myself, with some help from Jr. #GMOAT

Many on Twitter are pointing out how cute Ohanian is for making the gesture toward Williams, who will be playing in the BNP Paribas Open in Indian Wells, California next week. It will be the first time Williams has set foot on the court to compete since the birth of her child, according to the Verge. Williams last played while eight weeks pregnant in the 2017 Australian Open.

Awww that is so sweet. pic.twitter.com/oykhOgEj4t

Others on Twitter wanted to know if there are any other “Ohanians” out there.

Ohanian does seem pretty impressive, both as a husband and a public figure. He co-founded Reddit and was dubbed “Mayor of the Internet” for battling U.S. lawmakers over proposed bills aimed at cracking down on online copyright breaches, according to the Sun. Ohanian joined Williams in welcoming their first child, Alexis Ohanian, into the world on Sept. 1.

Dad life is the greatest. Entrepreneurship is all-consuming, it's sleepless, we call our startups our "babies," we are ridiculously proud of them, and we pour all of ourselves into them — but she is already all that and more, she is my legacy.

Williams, for her part, is ready to get back into tennis and thinks her baby girl “might help” her win a 25th Grand Slam title. According to People, Williams has already said her need to win has been replaced by a feeling of comfort because she knows she has a child to go home to. And it doesn’t hurt to have a super supportive husband as well, or a “G.H.O.A.T.”