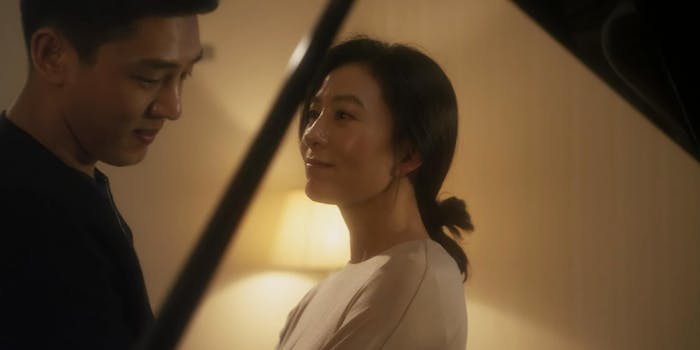 Why you should watch ‘Secret Affair’ on Netflix

A show with the title Secret Affair (also known as Secret Love Affair) seems like it’ll be a C-grade romantic comedy cobbled together by clichés and poorly constructed plotlines, but this Korean drama series is thoughtful in both its central romantic relationship and its scathing sociopolitical commentary on a society driven by hypercapitalism.

On one hand, it’s a truly compelling, nuanced take on a “taboo” affair between 40-year-old career woman Oh Hye-won (Kim Hee-ae) and working-class, musical genius, 20-something Lee Sung-jae (Yoo Ah-in). Also: it explores a foot fetish. On the other hand, the drama sarcastically eviscerates the hyper-rich and the way capitalists consolidate resources—both monetary and cultural capital. It’s certainly a toss-up between what is sexier, the romance or the astute political commentary.

Secret Affair not only satirizes the shenanigans of a really wealthy family. It also empathetically questions the role that a member of the upper-middle class, our main character Hye-won, has in their crimes. Her rags-to-riches story and what she has to do to progress is interrogated and, refreshingly, not excused. The 1% being the problem is the oft-repeated narrative, which is true, but the upper-middle class, and to an extent, the middle class’ complicity and desire to stay comfortable and have some access to power isn’t nearly questioned enough.

First, some context for Secret Affair: just like widely-lauded Parasite, the show is a very Korean drama that deals with very Korean societal issues. But Bong Joon-ho said it best: “We all live in the same country now: that of capitalism.”

The wealthy Seo family at the center of the show is a stand-in for South Korea’s chaebol—massive, usually family-run business colongermates—problem. Samsung and Hyundai are two real-life examples. Such organizations have been criticized for their outsized influences on the government and aggressive monopolistic behavior. Secret Affair was made in 2014, but it addresses many topics that sparked the 2016 ousting of South Korean President, Park Geun-hye, which then spiraled into a deeper examination of chaebol influence on policy and governmental corruption.

Secret Affair also tackles the corruption in education and how the rich parents of “Gold-spoon” children game the system. The show’s Seo family controls a music college and an arts foundation: Seohan Arts Foundation and Seohan Music College. Within both organizations, rich kids or kids with influential parents, colloquially called “Gold-spoon” kids, get free passes. “Gold-spoon” kids refer to the elite’s progeny whose life path is smoothed over by the assets of their powerful parents, and it’s still an ongoing issue in Korea. Just in 2019, the daughter of South Korea’s Justice minister, Cho Kuk, was caught fabricating her educational credentials. She was listed as the lead researcher on a complicated research paper, but astute sleuths noticed that she would’ve been only in high school at the time of publication.

If the above sounds familiar, well, America just had its reckoning with what the rich are willing to do to get their kids into colleges. They perhaps attempted even more ridiculous maneuvers, such as literally Photoshopping their kids into sports photos that they didn’t even play.

With this background information, you have a sense of the sociopolitical battles that Secret Affair is traversing and critiquing. Our main character, Oh Hye-won, is navigating those complicated webs since she works for the wealthy Seo family. Her title at Seohan Arts Foundation is director of planning, but she does a lot more than that. On a daily basis, Hye-won is traversing the power play between three members of the Seo family: a spoiled heiress Seo Young-woo (Kim Hye-eun), her dad, the Chairman Seo Pil-won (Kim Yong-gun), and her stepmom, Hang Sung-sook (Shim Hye-jin).

One really wonders why she deals with all the shit she has to do on a daily basis, but her motivations are crystal clear from the beginning. Hye-won already makes a fuckton of money but one day aspires to control the foundation. She is ambitiously climbing the ladder and so integrating herself with the Seo family is necessary for her own goals. She puts up with managing the heiress’ personal life, who is spoiled and violent and on more than one occasion, has physically attacked Hye-won. Hye-won also needs to balance her loyalty between Sung-sook and her chauvinistic Chairman husband, who each have individual agendas and secrets they’re hiding from each other.

Everything in Hye-won’s world is contractual, transactional, and assigned a concrete value. The music world Hye-won circulates in is rarely about music—it becomes emptied and is a tool for the Seo family, and other rich people, to advance their influence and capital. The show opens with Hye-won reviewing what song will be played during a benefit concert, and the Chairman’s second wife, Sung-sook, waving that off.

Sung-sook doesn’t care what song will be played, she’s more concerned with the politics of who’s directing and that’s what the two women proceed to talk about. At home, Hye-won has to listen to her husband whine about another professor’s influence in a program rather than any genuine comments about his students’ musical progress. At the affiliated music college, the professors in charge of admissions are trying to doctor the next batch of students, so it doesn’t look too obvious that they let in less-than-qualified students who have very wealthy and connected parents.

Hye-won isn’t a naive person who doesn’t know how she’s aiding these rich people and perpetuating injustices. She’s not helpless or ignorant; she knows what game she’s playing and that she’s complicit in everybody’s crimes. Though what’s really at stake morally and spiritually is not quite at the forefront of Hye-won’s mind until she tumbles headlong into a forbidden romance that could threaten to take everything she’s worked so hard for away.

The precipice comes in the form of a young, working-class, musical genius, Sung-jae. At the beginning, he’s working as a delivery guy, making it work day-to-day. In a twist of fate, he meets Hye-won through her husband and becomes her student. From the first meeting, it’s apparent Sung-jae and Hye-won have something special, on both a musical and personal level. It is perhaps the only genuine thing Hye-won has in her life, free of any assigned capital.

The affair causes Hye-won to wonder about the value of everything in her life. What is her marriage to a greedy loser worth, if she doesn’t one day have it? Hye-won despairs when all the things she’s worked so hard to get, influence, money, power, can’t stack up to the earnestness and genuine devotion in her relationship with Sung-jae.

In a memorable scene, Sung-jae unknowingly waxes poetic about Hye-won’s feet to the person herself through a webchat. He types and sighs, “If I told you I fell for a woman’s feet, is that strange?” Sung-jae’s recalling when he encountered Hye-won’s feet. She visits his home one night to help him with an audition piece and accidentally gets her foot stuck in a glue trap. What ensues is an oddly charged interaction as Sung-Jae tries to help Hye-won get the trap off of her foot. How the show made Sung-jae’s attraction to Hye-won’s feet romantic and not gimmicky or creepy is a mystery, but it magically works.

The tension between Hye-won’s internal battles all comes to a head when the Seo family gets in trouble for tax evasion and they try to pin it on Hye-won to save their skin, which is ironic, since the entire family was courting Hye-won to be on their side the entire drama. (Another lesson that the rich will side with themselves when it comes down to it. You get the sense that the Seo family would never give Hye-won the power she wanted in the Seohan Arts Foundation-—it was only a carrot at the end of the stick to keep her working.)

She does outsmart them in a series of maneuvers and is poised to have everything she wanted: complete control of the Foundation. That is, until she realizes that as long as she remains in this world, she’ll forever have to manipulate people and participate in institutions that are shams. The only thing that’s changed is that she’s a power player now, but fundamentally, structurally, Hye-won’s world has not changed.

So Hye-won makes a surprising decision: she turns herself and the Seo family in. She gets arrested and in court, pleads guilty, giving a remorseful speech about her complicity and full awareness of her crimes. Hye-won admits, “It wasn’t to make a living. It wasn’t for a noble cause either. It was just…I wanted to belong to the upper class.”

A typical “girl-boss” ending would have ended at Hye-won usurping the Seo family as the new head of the table, but instead, Secret Affair dismantles it all. Hye-won recognizes the toll that playing the capitalism game has had on herself and on others, and freely embraces the possibility of a different future. It’s a message of hope for all those who live in a country called capitalism: you could try to get free. It comes with a price, but maybe like Hye-won, we’ll realize we may not know what life looks like outside of it, but it’s worth it to strive towards something that’s more real than capital.