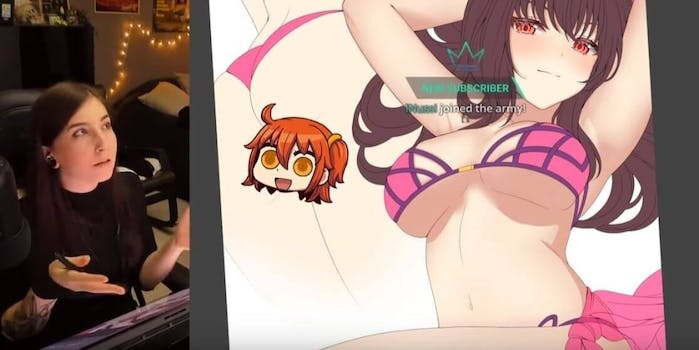 She doesn't understand what she did wrong.

Apparently, it didn’t matter. Saruei has been given another three-day Twitch ban, and she can’t figure out why.

“I can’t believe i got banned again, it just came out of nowhere …” Saruei wrote on Twitter on Thursday. “After getting my really first ban, I’ve been … censoring my art even more and everywhere on my work and I tried my best to make them [look] more family friendly. Why?”

She uploaded the email she received from Twitch, and it said she had shared “suggestive sexual content or activities. … Any attempt to circumvent this restriction may result in an extension of the suspension and the rejection of any appeal you may submit.”

I can't believe i got banned again, it just came out of nowhere since last time i streamed was this sunday.

After getting my really first ban, i've been putting censoring my art even more and everywhere on my work and I tried my best to make them looks more family friendly. Why? pic.twitter.com/SnGACwOfL9

On Twitter, Saruei—who has about 30,000 Twitch followers and who, according to Twitch Metrics, owns the fourth-most watched art channel on the platform—seemed devastated by the news.

“I am literally crying and shaking, I just received the email an hour ago and I have not been given explanations or warnings. It’s like a huge punch in the stomach, it hurts. I always try to do my best and despite everything, I get punished. I’m ready to apply any of your rules, but Twitch I beg you: I would like to know what I’ve been doing wrong so that I can remember my lesson and not start again. This is my main income, my whole life, without this work: I don’t know what I could become.

“I’m sorry for all the mistakes in my messages, I’m really in panic…”

The first time she was punished, she explained that her drawing was simply fan art that used the same costumes worn by video game characters that were already streamed on Twitch. She couldn’t understand why her drawings were marked as suggestive, especially since she’d been streaming that kind of content for the past year.

She wondered if she got in trouble because in two of her drawings “you could see the slight shape of a camel toe.” She also received an email from the Twitch staff at the time that said the “angle of the drawings focus on the butt in particular.”

This time, though, she’s even more confused. She shared a drawing of Bradamante from the Fate/Grand Order role-playing mobile game in which the character is shown wearing the same clothes as in the game and where Saruei hid “everything that looked like a shape of a cameltoe.”

You want to know how i was censoring my works? Here's an example! The drawing have nothing sexual, so I was hiding everything that looked like a shape of a cameltoe and the character is dressed like in the game! Here's Bradamante from Fate/Grand Order! pic.twitter.com/e6LZh1ro16

In this YouTube video posted on Thursday, Saruei points out that Twitch doesn’t have a problem with people who participate in body painting during a live stream or who stream themselves in real life doing “the same kind of suggestive poses” in “about the same level of clothing” as her artwork.

She said after her first punishment, she had nightmares that would be punished with a permanent ban. Now, she’s even more worried.

“You have to understand that it is basically my job that I might be losing now,” she said.