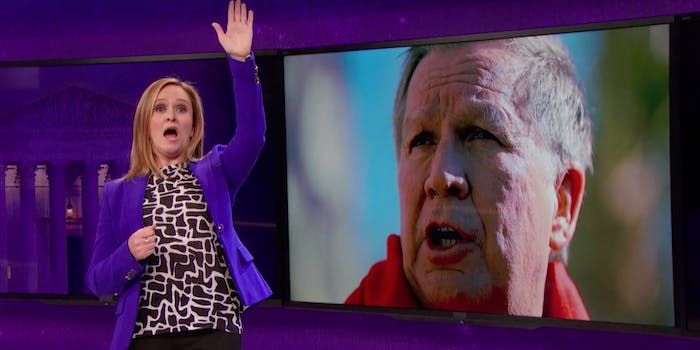 If you're gay or you need an abortion, Kasich's record doesn't look that great.

With Jeb Bush’s exit from the presidential race, Ohio Gov. John Kasich is being touted by some in the media as the “moderate” Republican candidate—or at least the sanest candidate still standing. But as Samantha Bee illustrated, Kasich isn’t as moderate as he wants people to think—especially on LGBTQ and women’s rights.

While Kasich recognizes same-sex marriage now—and even attended the wedding of a gay friend—he was originally the governor who refused to recognize the out-of-state marriage of Jim Obergefell, whose lawsuit eventually led to the nationwide legalization of gay marriage.

But Kasich’s record on women’s issues is even worse, according to Bee—and that doesn’t even include his recent remark that women “left their kitchens” to support him.

Ohio has some of the strictest abortion laws in the country, but the restrictions are added to unrelated bills to cover them up—and they don’t get much attention outside of Ohio. And when Kasich is asked about them directly, he refuses to answer the question.

Kasich isn’t a fan of Roe v. Wade either, which “sorta legalized it” once it became law of the land.

“Take a closer look at John Kasich,” Bee said, “because while these other chumps make empty promises to do awful stuff, the so-called moderate gets awful stuff done.”