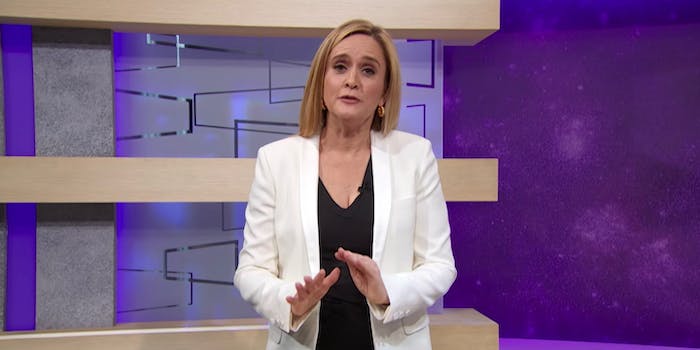 'Maybe we should all worry a little bit more about the niceness of our actions.'

Samantha Bee opened the latest episode of Full Frontal with another apology for calling Ivanka Trump a “feckless cunt.” She regrets that her language distracted from the larger issue she was bringing to light.

“You know, a lot of people were offended and angry that I used an epithet to describe the president’s daughter and adviser last week,” Bee said. “It is a word I have used on the show many times, hoping to reclaim it. This time, I used it as an insult. I crossed the line. I regret it and I do apologize for that.”

Although Bee (who doesn’t name Trump throughout the segment) wants to reclaim the word, she acknowledged that some women, who have had it hurled at them “at the worst moments of their lives,” want it to disappear. She also offered an apology to the kids affected by President Donald Trump’s teenage immigrant policy—which she was trying to highlight when she directed the insult toward Ivanka Trump—after her words became a distraction from something far more important.

However, there are some people Bee is definitely not apologizing to. She, for one, doesn’t care about the men who were insulted by her use of the word, and she concluded her segment with the suggestion that everyone should be concerned about what we do and how that affects others.

“I’m really sorry that I said that word, but you know what?” Bee said. “Civility is just nice words. Maybe we should all worry a little bit more about the niceness of our actions. OK. Thanks for listening.”