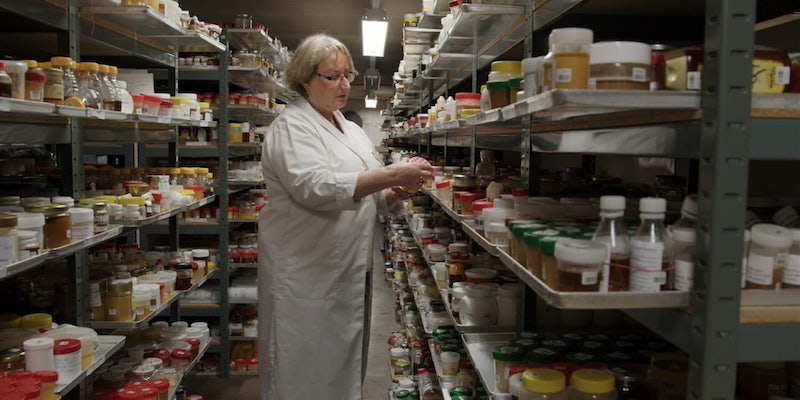 Netflix is pushing 'Rotten' as a true-crime series, but it's not quite engaging enough.

Netflix has been pushing Rotten, the new docu-series from the production team behind Parts Unknown and The Mind of a Chef, as a true-crime series about food. This is certainly an enticing angle, but it doesn’t quite get there.

The six-episode series avoids focusing exclusively on the horrors of food production like other docs that scream “Do you know where your food comes from?” and it’s not trying to showcase the beauty of food like Netflix’s Chef’s Table. The common thread in Rotten is the invisible hand that moves the food trade; the shadowy corporations and government regulations that obscure origins, and the human labor that brings you your food.

An episode about bees reiterates that they are in a dire situation, but also sketches out the criminal elements that sprung up around honey production in an effort to profit from it. Investigations into trans-shipping fraud were termed “Honeygate” and the term “honey laundering” is thrown out to describe a global scheme that saw actual indictments. Elsewhere, a RICO lawsuit against American garlic farmers leads to an investigation of Chinese prison labor. An episode about raw milk production offers a starting point for a horror movie.

Rotten has a lot of good starting points, but it often loses sight of them. An episode about “codfather” Carlos Rafael and the global fish market starts off promising, but then the focus shifts and that narrative is abandoned. With good true-crime docs, there are often interview subjects that stand out. In Rotten, many of the interviews aren’t that engaging. The closest the series comes to drawing out emotion is an episode about a chicken farmer named Sonny Nguyen, whose chickens were killed in 2015 in an act of sabotage.

Rotten is landing at a time when tech billionaires are touting the benefits of “raw water” and food trends increasingly feel like parodies. Though it’s being pushed as true-crime, Rotten remains an educational volume, and perhaps one we need right now. It does give viewers a useful list of food lingo and alerts us to statistics and means of production, but as a personality-based doc it doesn’t offer much food for thought.