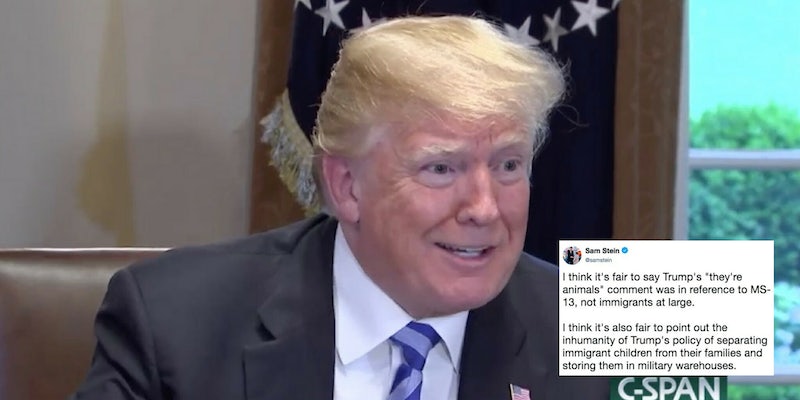 'These aren't people,' the president said.

On Wednesday, President Donald Trump made disparaging comments about deported immigrants, saying, “These aren’t people. These are animals.”

Trump’s comments came during a roundtable discussion with California sheriffs, after Fresno Sheriff Margaret Mims had said that U.S. Immigration and Customs Enforcement (ICE), the agency that detains undocumented people across the country, cannot talk to detained immigrants unless “they reach a certain threshold.”

Mims then went on to say that if she hypothetically knew about a member of the gang M-13, she wouldn’t be able to tell ICE about them if it weren’t for this threshold. That’s when Trump chimed in.

“We have people coming into the country, or trying to come in—and we’re stopping a lot of them—but we’re taking people out of the country. You wouldn’t believe how bad these people are. These aren’t people. These are animals,” Trump stated.

In response, Trump’s critics have slammed him for dehumanizing immigrants by directly calling them animals.

I’m sick of living in a country where Trump refers to immigrants as “animals”, and Stephen Miller collects a WH salary, paid for by hard working Americans of every race, religion and gender. #TheResistance

"These aren't people. These are animals."

The President of the United States said those words today. Out loud.

Donald Trump speaking today during a roundtable on immigration policy:

“These aren’t people. These are animals.”

Many have used Trump’s comments to compare him to Adolf Hitler and Nazis, who dehumanized Jews and other marginalized groups as justification for their murder.

Who said this, Hitler or Trump? "These aren't people. These are animals." https://t.co/VJwrbYdKne

Trump has demanded that people stand for the National Anthem, called Nazis fine people, said not clapping for him is treason, planned a parade for himself, and referred to people he considers “others” as animals, but pls tell me more about how comparing him to Hitler is unfair.

Trump supporters, however, have argued that Trump’s comments were specifically made regarding members of the gang MS-13, and have shamed critics and news outlets for sharing this soundbite of the president without this context.

He was specifically talking about MS-13, and you know it. They are animals. I know you would rather side with them than Trump as you so often make clear but it’s a bad look for you Andrea. https://t.co/Mgoj1celNv

Trump gets to call human beings animals because when we argue with him, he gets to say that liberals are defending MS-13.

It's clear from the context that he's talking about MS-13, but it's also clear that he wants to paint undocumented immigrants with the broadest brush.

Based off Trump’s comments, and the general context in which he made them, it’s unclear whether the president was actually referencing members of the gang MS-13. However, even paring down Trump’s comments to talking about gang members, aka “criminals,” as opposed to undocumented immigrants, still means the president’s comments were dehumanizing to criminals, who are people nonetheless.

When @realDonaldTrump referred to deported Latino immigrants as “animals” it cut to the quick. They’re not animals-The vast majority are law-abiding folk looking for a better life for their families. @DonaldJTrumpJr says @POTUS was only speaking of gang bangers like #MS13 Still..

I think it's fair to say Trump's "they're animals" comment was in reference to MS-13, not immigrants at large.

I think it's also fair to point out the inhumanity of Trump's policy of separating immigrant children from their families and storing them in military warehouses.

Comments disparaging immigrants are not the first from the president. Shortly after announcing his campaign, Trump called Mexicans “rapists,” and doubled down on those comments recently when speaking about the caravan of migrants from Central America. Trump also asked earlier this year why the U.S. isn’t taking in immigrants from countries such as Norway, and instead accepts immigrants from “shithole countries,” a term he used in reference to Haiti and African countries.

Trump called Mexicans rapists in 1st 2 mins of his campaign. I can’t understate the level of exhaustion 3 yrs of u all *almost-but-not-quite* being ready 2 find his hatred of immigrants beyond-the-pale has created. Like what else do y’all have 2 hear? This animal stuff isn’t new.

Regardless of which group of people the president was referencing, these dehumanizing comments appear to be part of a larger pattern when it comes to Trump and immigration. That much is clear.