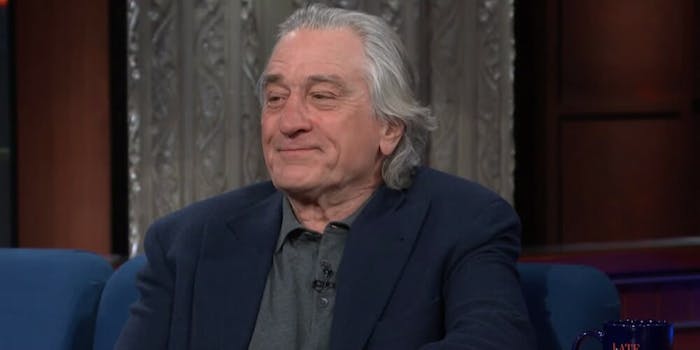 She watched 55 episodes of 'Friends' in four days.

Robert De Niro’s company Canal Productions is suing an ex-employee for allegedly embezzling money and binge-watching Netflix on the clock.

The company is suing former employee Graham Chase Robinson for $6 million. Robinson started working for the company as De Niro’s personal assistant in 2008. She later became the vice president of production and finance with a salary of $300,000. In April 2019, Robinson left the company as concerns about “corporate sabotage” racked Canal Productions, according to Vanity Fair.

The lawsuit claims that Robinson spent thousands on unauthorized purchases, used De Niro’s frequent flyer miles without permission, and spent “astronomical amounts of time” watching Netflix while at work, according to Decider. The lawsuit details purchases of about $12,700 at Paola’s Restaurant, $8,900 at grocery stores, and $32,000 in taxis and Ubers.

Then there’s the Netflix and chilling while supposed to be working situation. In a four-day period, the lawsuit alleges that Robinson watched 55 episodes of Friends. Not long after that binge-watching session, she apparently watched 20 episodes of Arrested Development and 10 episodes of Schitt’s Creek, according to Decider.

“Watching shows on Netflix was not in any way part of or related to the duties and responsibilities of Robinson’s employment,” the lawsuit reads.

In her resignation email, Robinson allegedly said that concerns about her spending were “ridiculous.”