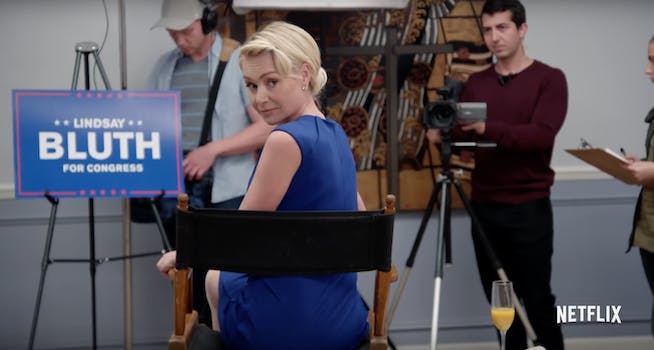 In a television landscape littered with sequels and reboots, it’s hard to remember the distant time of 2013, when Netflix’s decision to bring back Arrested Development was a major coup. The 15 new episodes viewers got, however, were met with a range of skepticism and disappointment as the increased freedom the writers had was used in service of a storyline which separated the Bluth family for most of the whole dang season.

The fifth season of Arrested Development attempts to correct these mistakes, and depending on your definition of “correct,” mostly succeeds. This time around, the Bluths are forced to come together over two separate causes. The first is to rally behind Lindsay (Portia de Rossi) in a race for Congress, and the second is to hunker down following the disappearance of Lucille Austero (Liza Minnelli). Those who watched last season will remember the efforts of George Sr. (Jeffrey Tambor) and Lucille (Jessica Walter) to build a wall on the U.S./Mexico border, so it should come as no surprise that the Bluths are taking a little inspiration from President Donald Trump this year. As the two major storylines unfold, season 5 essentially becomes part political satire, part murder mystery spoof, just as promised.

The cast is, for the most part, back together this time around. The simple joy of seeing the Bluth family in the same room together in episode two should be enough to make season 5 a must-watch for diehard fans. So much of what was wrong with season 4 came down to the muddled chronology, jumping around between timelines and storylines, going from character to character, often watching our beloved Bluths interact in isolation from one another. Creator Mitch Hurwitz did his best to rectify these issues with the recent “remix” of season 4, Arrested Development: Fateful Consequences, which recut all the episodes, shortening the runtimes, combining storylines, and putting everything in a more linear order. (Ron Howard voice: “Not that the Internet hadn’t already tried this.”) To a certain extent though, the damage was done.

Perhaps this determination to get it right is why this season, initially rumored to arrive in 2016, took so long. But the wait has improved the quality of the episodes, if not the anticipation for them.

The larger timeline remains muddled, as the show struggles to get caught up after most of the characters went their separate ways at the end of season 4. But the length of the episodes is more manageable this time around too, which always goes a long way on Netflix.

It’s not that these characters shouldn’t have their own storylines. The ensemble gets some great ones this season, including Maeby (Alia Shawkat) running her mom’s campaign, Gob (Will Arnett) taking over the Bluth Company, Tobias (David Cross) trying to stay in the family by “filling in” for different members, and Buster (Tony Hale) becoming the prime suspect in Lucille Austero’s murder. Arrested was always built on its ability to create scenarios in which the characters could break apart and go on separate journeys, only for those journeys to lead everybody back together again (the opening of Fateful Consequences literally states as much).

This is also what gives the show its sense of humor, using these storylines to generate the running gags that provide its foundation. We see many of these recurring jokes pop back up in season 5 (the Banana stand, teaching lessons, the list goes on and on), as well as the creation of several new ones. The challenge of the new episodes, to balance both, embodies the struggle of all TV revivals—to give the fans what they want while also still trying to innovate. But for Arrested specifically, the key is that no matter how many times Michael (Jason Bateman) threatens to walk away from his family, their dysfunction is so overwhelming it inevitably pulls him back in.

Michael is, of course, still trying to get out of his family, the difference is that they are in on the joke by now, and even tell him as much as they prepare to give themselves the “family of the year” award (which they made up). If the end of season 3 and 4 illustrate why the show needs Michael Bluth to always save the day, season 5 is a validation of this hard truth. It was fun to see Michael spiral out of control after finally leaving his family last time out, but it’s more fun to see him realize that no matter how hard he tries to escape they’re always going to find a way to worm their way in.

The heart of this show has long been Michael’s relationship with his son, George Michael (Michael Cera), and season 5 stays true to this. But the irrevocable damage he does to this relationship in season four is teased out in almost agonizing detail in the new episodes. From a comedy perspective, it makes sense. From an emotional one, it’s hard not to want to yell at these stunted man-children.

It’s been widely reported that Tambor was fired from his acclaimed role as Maura Pfefferman on Transparent for sexual misconduct. Although his performance in the latest season of Arrested Development was completed before this came to light, and although the show naturally works better when he’s around the rest of the cast, his presence, naturally, is a sore spot. Ill-timed jokes about cisgender George Sr. not winning any awards for dressing up as a woman don’t help. And after this week’s disastrous New York Times interview where Tambor’s male castmates defended his abusive on-set behavior while invalidating the abusive on-set experience of Walter, I don’t blame anybody who chooses to walk away at this point.

Arrested Development has had a long, strange history and the fact we’re getting new episodes feels like a fluke. Who would have thought this scrappy underdog would’ve lasted three presidential administrations, and commented on all of them? The show has become a reflection of how TV has changed, as well as a snapshot of the times it changed in. (The new season is so up-to-the-minute, it features jokes about Ron Howard’s involvement in the Star Wars franchise.) I don’t know whether the show is going to be looked at as a harbinger of the streaming revolution in years to come or if it’ll be seen as a victim of it. But until Arrested Development tells us to “say goodbye to these,” I plan to stay on that stair car.