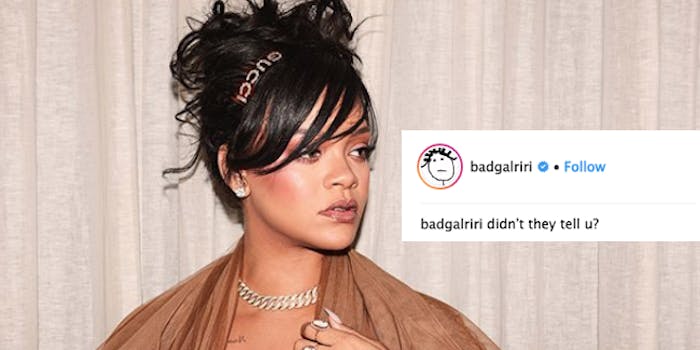 Rihanna‘s fans are in overdrive trying to figure out what a cryptic Instagram post could possibly mean.

It all started Tuesday when the singer shared a photo of two TVs with the caption “didn’t they tell u?”

didn’t they tell u?

Based on the vague image, it’s not exactly clear what “they” were supposed to “tell” us about. That’s when Rihanna’s fandom—the Navy—kicked into detective mode. The singer’s last album Anti, came out in 2016, so it would make sense timing-wise for her to be potentially teasing new music. But the upper TV appears to display an image of her cleavage in a bra or bikini top, which led other fans to wonder if she was teasing a lingerie line. The fandom was torn:

Me trying to understand this picture pic.twitter.com/A1HEJU2UZf

If these isn't new music we don't want it

is this a bra. is this the lingerie line. rihanna i keep telling u im broke and u keep disregarding it. please just give me some music i can't AFFORD anything else https://t.co/9MhQ3LwwUm

I *think* this may be Rihanna’s bosom in a bra? The dark rectangular area looks like the very top of her tattoo. pic.twitter.com/UAj6zVqmtN

Listen idk what Ri's tryna tell us but I DO know that if I get new music from her, Drake, and Beyoncé in the same season I will self combust. https://t.co/zCaPuzJgHG

Eagle-eyed followers noticed that the singer had also created a spinoff Instagram account, and it’s already verified: @savagexfenty. Rihanna’s last name is Fenty, and that’s also the name of her beauty line as well as her collaboration with Puma sneakers, so a Fenty spinoff definitely seems like it could be a new lingerie brand.

Whatever this project ends up being, she definitely has people talking now.