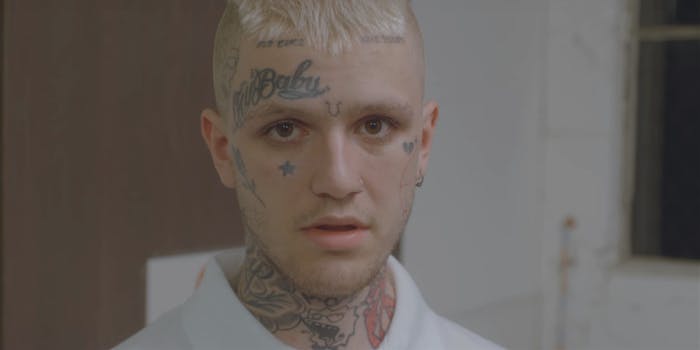 The rapper Lil Peep has passed away at age 21. The rumored cause of death was a drug overdose.

Lil Peep, real name Gustav Ahr, rose up through SoundCloud, riding on songs about drugs and suicide, and presenting a colorfully tattooed persona. A January Pitchfork feature called him “the fresh-faced avatar of post-emo angst that’s not quite rap or rock.” In that interview, Lil Peep also opened up about his struggle with depression.

His manager, Mikey Cortez, posted to Instagram Wednesday night to seemingly confirm Lil Peep’s death. Just one day ago, he posted about trying to find happiness, stating, “Maybe I won’t die young and I’ll be happy?” In a video posted Nov. 14, he says he took six Xanax, and that he’s “good, I’m not sick.”

lil peep passing is such a tragedy. i remember hearing him for the first time and being so enthralled. love to all his family, friends and fans. we have lost something special. R.I.P.

iM DiSGUSTED WiTH LiFE MY FRiENDS ARE SAYiNG LiL PEEP DiED i DONT WANT TO BELiEVE it he had such a bright future omg I just saw him we just we freestyling in my hotel and he said we should get matching tattoos so I did he was fearless and unfazed omg I don’t like this idk pic.twitter.com/6RXXOlOWGF

Peep was the nicest person. hanging out with him, talking to him about music, the song ideas we were going to do together and touring was so amazing. Everyone will miss you man @Lilpeep

Lil Peep had just released his mixtape Come Over When You’re Sober, Pt. 1.

Update Nov. 28, 9:31am CT: Lil Peep’s team has released its first statement since his death.