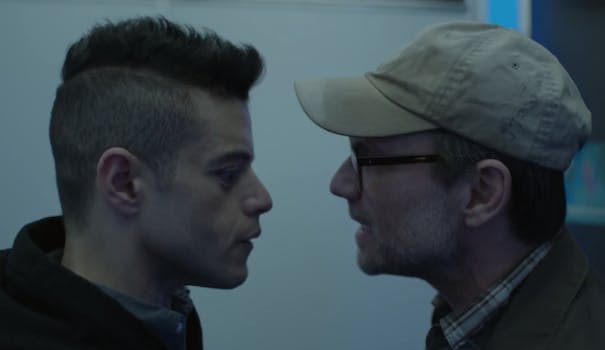 Rami Malek reveals that he’s not great at typing

The 'Mr. Robot' star and his castmates reflect on their groundbreaking series at Tribeca.

“He can barely type on a keyboard,” said Carly Chaikin, who plays Darlene on the show, on Sunday afternoon at the Tribeca Film Festival. “I’m not a millennial who can just bang everything out at 100 words per minute,” Malek replied.

The Tribeca talk, titled “A Farewell to Mr. Robot,” also included actor Christian Slater and Mr. Robot creator Sam Esmail. Besides teasing one another on their computer skills, the actors discussed how they got involved with the series, and how it changed their lives over the last few years. The series’ upcoming fourth season, out later this year, will be its last. Mr. Robot premiered in 2015.

Although the show is about hackers, the actors don’t actually need to know how to code. Chaikin said that the keyboards are pre-programmed and she’s just “pressing random things” during scenes. But to prepare for her role, Chaikin said she read books on hacking and became interested in representing someone who doesn’t fit society’s image of a typical hacker. “Here’s a cool girl who is really smart and a great hacker,” she said of Darlene.

Esmail said he created the series because he wanted to tell a story about hackers—who at the time were not a part of the mainstream cultural conversation. Fast-forward to current day, and major cyber attacks are a very real part of our reality. “The tagline in the first season was ‘Our democracy has been hacked,’ and that was before democracy actually was hacked,” he said. “I didn’t know we were marketing the future.”

The show continues to let “current events sort of inspire us because that’s what we feel passionate about,” said Esmail. “Literally, the day we got picked up, the Sony hack happened. And then a year later, it happened in our general election.”

Despite being inspired by real cyber attacks, Mr. Robot is still set in 2015, so there’s no pressure to keep up with our rapidly changing technology. “It’s almost like a period piece with current events,” explained Esmail.

Esmail also talked about casting a non-white actor in the lead role of Elliot Alderson. Malek is Egyptian-American, as is Esmail. But the creator said he wasn’t deliberately trying to find a person of color for the role.

“[Malek] was just the right person for the right role, and it had nothing to do with that,” said Esmail. “For me, it was never a big deal. I remember there were conversations about changing his name from Elliot. And I asked, ‘why’? I kind of just ignored that part.”

Malek, meanwhile, was happy to receive a role that wasn’t related to his ethnicity. Before working on Mr. Robot, Malek played the Egyptian pharaoh Ahkmenrah in the Night at the Museum films and also had a few roles as a terrorist, the actor said. “At one point, I put my foot down and said, ‘that’s going to be it for that.’ I would get offers of that nature, and you desire to work as an actor, but you realize… I’m not representing myself or my community well and perpetuating an idea of what that culture is like.”

When Malek was selected for the role of Elliot, he wasn’t sure if the name of the character would be changed. But Esmail was “very steadfast about not changing the name,” he said.

Ultimately, Malek’s portrayal of Elliot led to his role as Freddie Mercury in last year’s Bohemian Rhapsody, for which he won the best actor Oscar.

The final season of Mr. Robot will be set during the winter holidays of 2015. If you need to catch up on the series, seasons 1-3 of Mr. Robot are streaming on Amazon Prime.