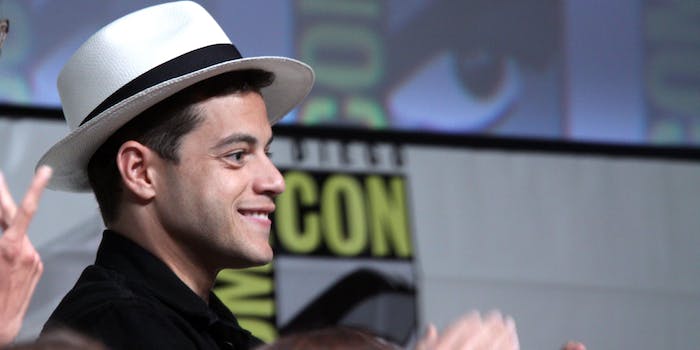 Yes, there are memes.

Twitter user xan, who uses they/them pronouns, is a long-time Rami Malek fan. But little did they know that on Monday night, their life was about to become intertwined with Malek’s after the two passed each other in New York.

Xan eventually reached out to Malek and turned on their camera’s video mode, asking if he could “say hi to my friends.” Malek quickly interrupted, shaking his head and saying, “no, but we can take a picture.”

Of course, the whole entire conversation was recorded on xan’s phone. Afterward, xan says Malek “literally swiped my camera” and changed it to photo mode, just to make sure the two would get a picture and not a video.

Xan’s story is just the perfect viral cocktail: An adoring fan meets Malek, walks up to him, gets shot down for a video, and the actor then proceeds to take their phone away from them to change the camera mode. As you can imagine, Twitter is going nuts with the whole premise.

rami seeing the phone is on video mode and not photo mode: pic.twitter.com/1xVZ693AIv

rami malek when he sees a fan is recording a video pic.twitter.com/Abcc2qDoIG

call me by your name (2017) pic.twitter.com/rzzSeN0EIT

sufjan stevens: is it a video
rami malek: no but we can take a picture

Even xan is sharing some of the memes.

Others compared Malek to actor Jake Gyllenhaal, who has absolutely zero chill when it comes to meeting fans.

As for xan, it’s safe to say their notifications are swamped with Malek-inspired posts. Their follower account has since ballooned to 2,220 Twitter users.

“My follower count was 400 this morning.. did I make a career?” they tweeted. Probably not, but they can take a picture.