Kordei is the only black member of Fifth Harmony.

Just a few weeks after comedian Leslie Jones left Twitter due to racist cyberbullying, one member of the pop girl group Fifth Harmony is enduring the same saga. Normani Kordei is also calling it quits with the social media service after facing racist attacks from the group’s very own fans.

Kordei, born Normani Hamilton, is the only black girl in the group. She used her last message on Twitter to write “I am not the first black female celebrity to deal with this and I’m sure I won’t be the last,” on Saturday.

It all started when the 20-year-old was asked about the other four members in a Galore magazine interview on Facebook Live. She was asked to use one word to describe each girl and seemed to struggle with finding one for the group standout, Camila Cabello.

Once the video made it’s way onto social media many speculated a feud between Kordei and Cabello. Many of Cabello’s fans, #Camilizers, used racist comebacks to attack Kordei for her slow response, calling her a “monkey” and digitally altering her face over a lynched slave. 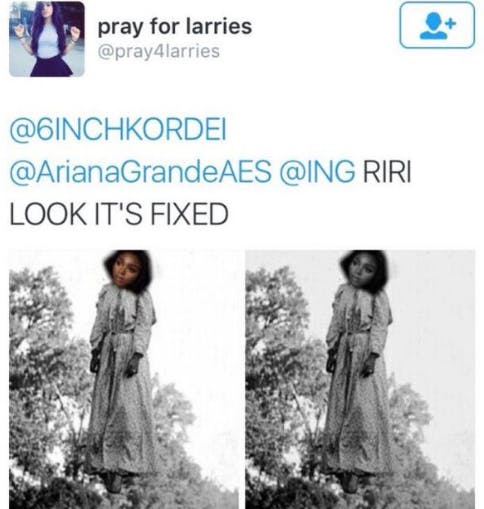 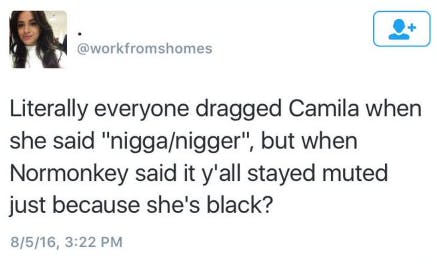 Kordei expressed her feelings in a message on Twitter, telling her attackers they were blowing things out of proportion.

She used a separate message to call her anonymous bullies “cowards” and explained why she would be taking a break from Twitter.

The other four members of the group are standing by Normani with messages of love and support on their social media accounts.

i stand by the words "love only", meaning I won't tolerate on my timeline any kind of hate, racism, or discrimination towards ANYONE. period

The pinned tweet on Kordei’s profile from July expresses solidarity with the Black Lives Matter movement. No word yet on when Kordei will return to Twitter.