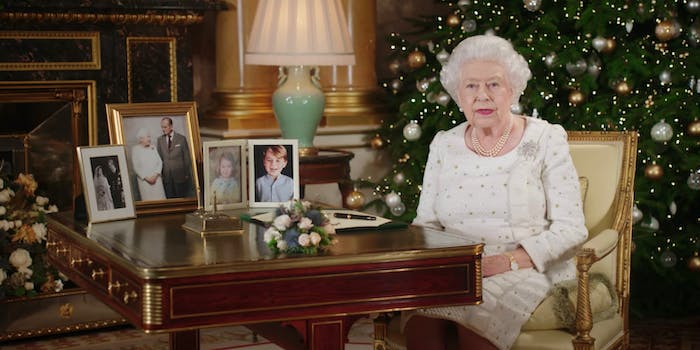 This isn't the first time she's made this particular reference, though.

As much as The Crown—Netflix’s crown jewel drama about the British royal family—takes liberties and leans toward propaganda, it does nail some of its historical depictions. And for some fans, this had never been more evident than when Queen Elizabeth II touched on one of the show’s plot points during her annual Christmas speech.

Many of us have only known Queen Elizabeth II to conduct her annual Christmas speech via television, but it wasn’t always that way. This year marked the 60th anniversary of the queen’s first televised Christmas speech, which the queen at the time described as a “landmark.”

“Six decades on, the presenter has evolved somewhat, as has the technology she described,” Queen Elizabeth II said. “Back then, who could have imagined that people would one day be watching this on laptops and mobile phones, as some of you are today.”

Some viewers watching around the world recognized the clip that Queen Elizabeth II featured because they saw it reenacted by Claire Foy, who portrays a young Queen Elizabeth II on The Crown, in the season 2 episode “Marionettes.”

It even led to some believing (and others joking) that the queen had referenced The Crown in her own speech; it’s rumored that Queen Elizabeth II watches the show.

Husband: we have to watch the Queen’s Christmas speech, it’s tradition. Me: (shouting from other room) OMG, is she referencing the Crown?!? pic.twitter.com/ud38YHLlUn

Was it a nod to The Crown? Probably about as much as a historical event being depicted on a prestige television show can be, which is to say not much. The Christmas speech’s television debut in 1957 was monumental, so she was acknowledging how the speech has evolved over the past 60 years.

Besides, Queen Elizabeth II replayed part of the 1957 speech to open her 2007 Christmas speech—the broadcast’s 50th anniversary—so the inclusion of the clip isn’t exactly a new thing sparked by The Crown. Think of it more as a historical Easter egg in The Crown than a Crown Easter egg in real life.

If you want to see how The Crown episode stacks up to the real thing, the queen’s first televised Christmas speech, which was uploaded online ahead of its 50th anniversary in 2007, can be viewed in its entirety on YouTube.