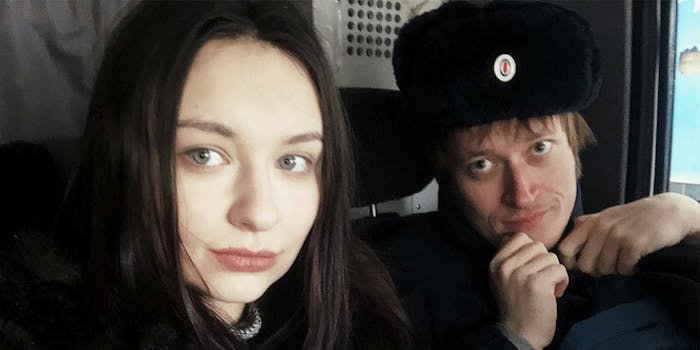 Members of Pussy Riot feared missing in Crimea have been found

They had been detained several times.

On Tuesday morning, the official Pussy Riot Twitter account announced that two of its members have been found after going dark in Crimea.

Members of Pussy Riot, the Russian punk collective, have been arrested and detained several times over the years, with two members being jailed in 2012 for “hooliganism.” In 2013, Nadezhda Tolokonnikova was feared missing after her husband tried to find her in a Siberian prison camp.

According to the band’s Twitter, Olya Borisova and Sasha Sofeev had been detained several times by Russian security, which reportedly broke their phones and computers. A spokesperson for Pussy Riot confirmed the details of the tweet.

According to Radio Free Europe, three members of the group were detained in Crimea, including Maria Alyokhina, who was jailed along with Tolokonnikova in 2012. Crimean lawyer Emil Kurbedinov told RFE that the three were brought to a medical institution for testing, but did not elaborate on why. Alyokhina was reportedly released. Borisova tweeted about being detained on Feb. 25 but has not tweeted since. Borisova and Sofeev were previously detained in August, after protesting the imprisonment of Ukrainian filmmaker Oleg Sentsov.

Just hours after the first tweet, Pussy Riot tweeted that the two had been found.

A Tolokonnikova-led Pussy Riot is set to embark on it first U.S. tour next month.