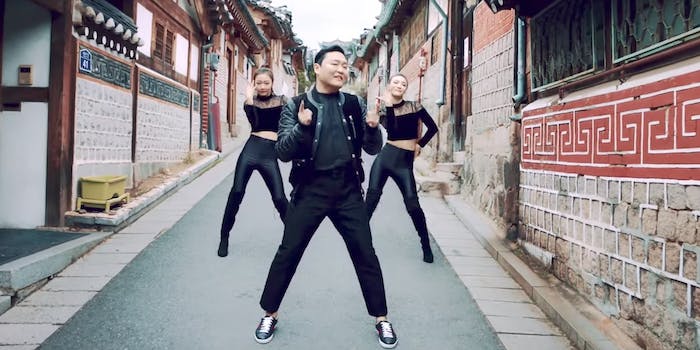 Psy, of ‘Gangnam Style’ fame, is back with 2 wild music videos

Psy has been hard at work on a new album.

Five years ago, “Gangnam Style” broke the internet with its catchy chorus, ridiculous music video, and easy dance. Now Psy is back with two new singles and a new album—and they’re just as catchy and flashy as you’d expect.

Psy has been busy these last five years and even began recording an album in English before scrapping it to regain focus on the Korean market. Both new videos—done in characteristic Psy style with outlandish routines and vibrant colors—already have more than 3 million views on YouTube and were uploaded less than 24 hours ago. (“Gangnam Style” broke YouTube‘s view counter.)

One video, “I Luv It,” features Piko-Taro, aka the viral “Pen Pineapple Apple Pen” star. It also references the wild number of YouTube views it will likely receive.

The other, “New Face,” features a funny dance reminiscent of “Gangnam Style.”

Good luck getting either out of your head.