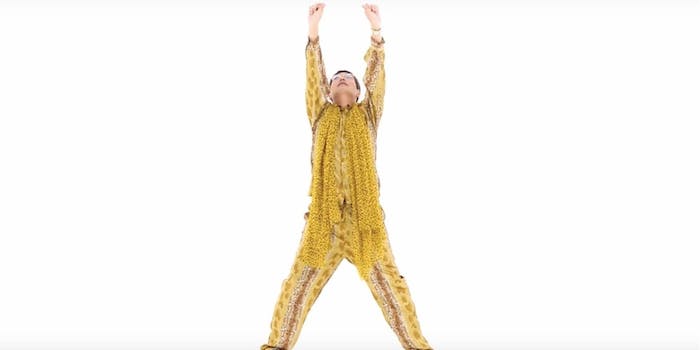 Some people want to know what the new popular earworm is. The new song you will at first think is stupid, but will find yourself chanting anyway. “What is the new chant?” they demand to know.

PPAP is the first song by Japanese pop man Piko-Taro, who dresses in animal prints and generally looks like an alive anime character. It came out in August and seems to be a medium-sized hit in Japan, and now it’s finally made its way to the American internet. (And, probably, your Facebook feed.)

The lyrics, in English, are about having a pineapple, an apple, and a couple of pens. So: Apple pen. Pineapple pen. That’s pretty much it, on the surface.

That would be good enough, but there is more. Piko-Taro, as Johnny Strategy of the Japanese art and culture site Spoon & Tamago explains, is not real.

He’s a character dreamed up by comedian and DJ Kosaka Daimaou (real name: Kazuhiko Kosaka). Kosaka first introduced the character Piko-Taro in live, stand-up performances. It was so popular that he decided to develop the character even further and, in late August of 2016, uploaded what would be Piko-Taro’s first Youtube video: PPAP. As of the writing of this article, the video had almost 2.5 million views on Youtube.

There are other Piko-Taro videos, too, but they’re in Japanese, not musical, and the jokes don’t really translate.

What does translate are all the insane fan remixes of PPAP that have hit the internet since the song came out in August.

There’s even a #PPAPchallenge, which is becoming a weird teen meme in Japan.

It’s tempting to compare PPAP to “Gangnam Style,” another pop meme imported from Asia. You may remember—or look back in shame at—the whole internet imitating Korean singer-rapper Psy’s horse-riding dance from the Gangnam Style music video. You may also remember that song being fun as hell before it got played out and adopted by #brands.

Pen Pineapple Apple Pen has some crucial advantages, though: It was a joke song to begin with, and it’s only a minute long.