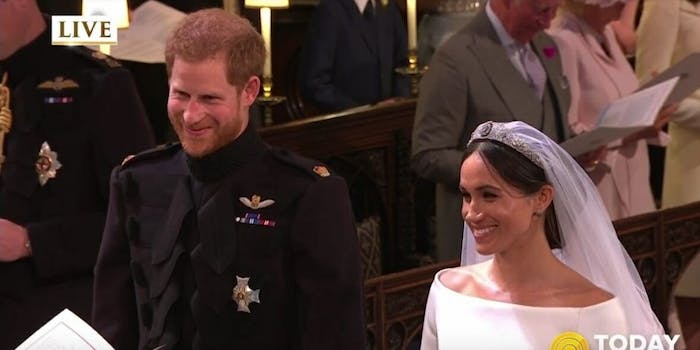 Here are 17 of the best tweets.

It didn’t matter that it was early Saturday morning, and it surely didn’t matter what people’s occupations were. If your Twitter timeline on Saturday wasn’t filled with commentary about Prince Harry’s wedding to Meghan Markle—aka as the #RoyalWedding—you clearly don’t follow enough people on the social media site.

Sports writers weighed in on the moment. Comedians made jokes. Professional athletes had their say.

It apparently didn’t matter that America was still mourning the Santa Fe shooting or that Donald Trump is still feuding with the FBI or that the LGBTQ community still is facing harassment every day. For a few hours on Saturday morning, the world stopped and watched Harry marry Megan.

I give it six weeks. #royalwedding

The Revolutionary War was shorter than this wedding.

this is some disney shit right here pic.twitter.com/oKMQSo25ZG

whatever forces conspired – british people, weddings – to get millions of humans on the planet to simultaneously listen to a black preacher in a white ol’ church & ponder the words of MLK on the redemptive power of love & 1 human family…fuck it. i’m in. good job, #royalwedding

Meghan Markle posing in front of the Buckingham palace at age 15. And marrying the prince 21 years later.

What a glow-up. #RoyalWedding pic.twitter.com/1m90un7Jv0

BBC amazed at Meghan's ability to walk down the aisle by herself. We have a strange concept of victimhood in Britain.

Stay cool, just a few more moments and the heist is complete… pic.twitter.com/Nf9B70oOkk

It was hanging right over the plate man https://t.co/nwPmlsIbcV

And people adored these subversive headlines.

As well as this subtweet.

In the end, it was two people getting married, and hundreds of millions of people watched. No matter whether you think the massive coverage of the event was ridiculous or whether the nuptials were the most romantic moment ever, there’s little doubt that there’s nothing finer than a spring wedding to make all your worries disappear for a few hours.