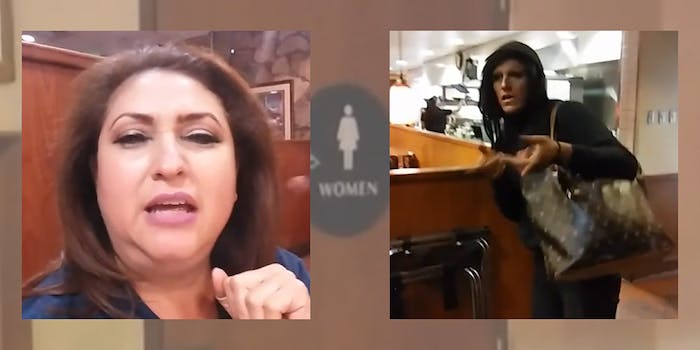 She was allegedly 'following' the trans woman around Los Angeles.

A Republican candidate for Congress recorded herself confronting and misgendering a transgender woman because she used the women’s restroom in Denny’s.

Jazmina Saavedra was at a Los Angeles Denny’s on Tuesday when she saw a transgender woman in the bathroom, she claimed in a Facebook Live stream. Saavedra, who is running for California’s 44th District in the House of Representatives, proceeded to enter the restroom once again and confront the trans woman using the stall.

“I’m trying to use the ladies’ room right now, and there is a man here saying that he’s a lady,” Saavedra said during the livestream.

“First off, you guys are harassing me, I’m just using the restroom,” the transgender woman responded, to which Saavedra interrupted by shouting, “Why you use [sic] the ladies’ room?”

While a man who appears to be the manager tried to de-escalate the situation, Saavedra decided to wait outside the bathroom for the transgender woman, ranting about transgender rights and claiming gender-affirming policies “put in danger a woman like me.” As soon as the trans woman in question came out, Saavedra began harassing her once again.

“You invaded my privacy,” Saavedra said in the video.

“Excuse me? I was using the toilet, how did I invade your privacy?” the transgender woman responded as Saavedra began yelling at her. “And I’ve seen you yesterday, following me.”

Eventually, the transgender woman was escorted out while the two continued to argue. But the confrontation could’ve escalated in a much more violent direction. Saavedra later turned the camera back to herself, revealing that she had both a stun gun and pepper spray in her purse.

“This is insane. How could I be with a man inside a lady’s room just because he think [sic] he is a lady. This is unbelievable, all in California happens [sic],” Saavedra said in the video. “But anyway […] I was with my pepper spray ready, and I called the manager, so he helped me.”

Saavedra is running on a platform for “protecting the integrity of traditional family values” and “more jobs,” according to her official campaign website. She calls herself a “pro-life,” Second Amendment supporter, and a supporter of “President Trump’s agenda.”

Her opponent, Rep. Nanette Barragán, has since condemned Saavedra’s actions.

“I was appalled by the treatment that this woman received for simply trying to use the restroom,” Barragán said in an official statement to the Daily Beast. “Everyone has the right to their own identity, and the right not to be discriminated against for who they are.”