Behind the lens with Tumblr icon Pleated-Jeans

Things unicorns can’t do. Hand signals for scuba divers. The process of sharing a cookie. Ways in which various sharks and turtles kick back on the weekend. Where does Jeff Wysaski get his crazy ideas for Tumblr posts?

“I do a lot of brainstorming sessions,” Wysaski, better known on Tumblr as Pleated-Jeans, told the Daily Dot. “I spend a lot of time online looking at art that other people make and thinking, ‘Oh, that’s funny. What makes that so funny?'”

In reality, Wysaski has known what it takes to catch laughs for quite some time. Born in Dallas, Texas, the 30-year-old moved to Los Angeles in 2008 to blog and write sketch comedy. He fell in with a few sites—Guyism and Slacktory, among others—and did some work with the Upright Citizens Brigade before he had his “come to Tumblr” moment two years ago.

“I was making funny stuff for [those sites], but then I thought, ‘Why am I making them money?’” he said. 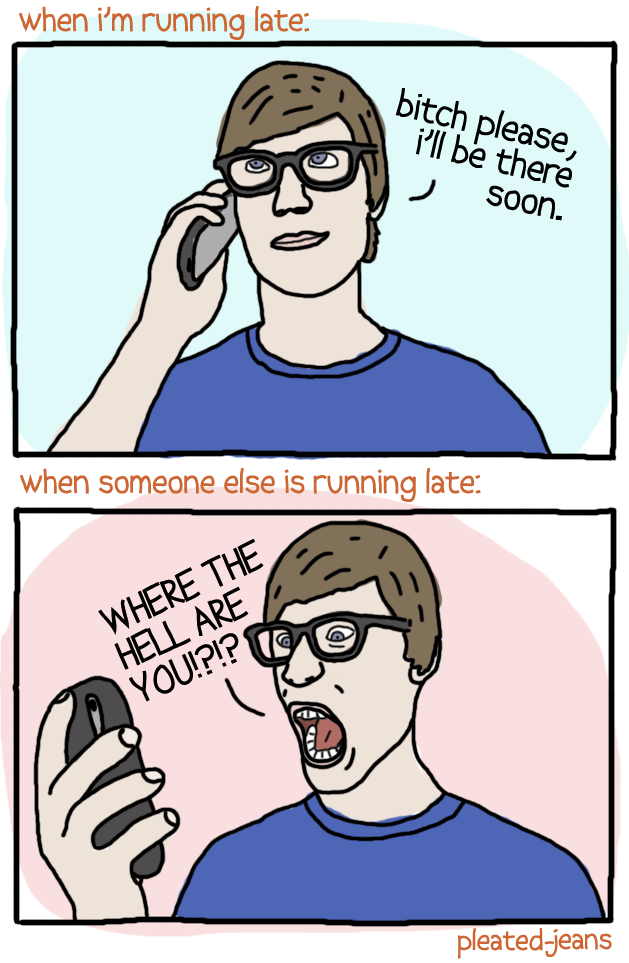 Wysaski started Pleated-Jeans with a simple intent: to create something new to post every single weekday. And if there’s a weekday since that he’s missed out on posting, we sure have too. He’s a full-time Tumblr, a personality who spends roughly two hours a day on the site and contributes for a living. (Literally. Wysaski does a small bit of side work for Nickelodeon, but running Pleated-Jeans is basically his job.)

In that time, he’s become a leader in the art of constructing an online joke: take the ordinary and make it extraordinary.

“I did this one post the other day that says, ‘When I’m running late,’ and it shows me on the phone being like, ‘Bitch please, I’ll be there soon,'” he explained. “The next deal is when someone else is running late, and it’s me screaming at the phone being like, ‘Where the hell are you?'” All I did was take two pictures of myself in Photo Booth and put them on photoshop and drew the lines to give it some impact.”

Creating that final artistic emphasis is a big part of what makes Pleated-Jeans’s posts so appealing. While he readily admits that he’s not much of an artist (“The only reason what I make looks as good as it does is because I can trace photos”), Wysaski is a natural when it comes to using the Internet’s resources to make the funny funnier.

“Reaction GIFs are a great way to punctuate a joke. You can do photo sets, so you can do one image on top with a GIF reaction underneath; that makes the original image even funnier. You can also insert yourself into the jokes the way The Frogman does. I do that sometimes.”

That Wysaski throws a nod to The Frogman is hardly a surprise in Tumblr circles. His first big community break came when the Tumblr kingpin reblogged his art.

“It was such a good feeling,” Wysaski remembers. “It’s motivation. People saw something that I made and showed that they liked it, so I wanted to make more of it.”

Now that he’s in a seat of authority, Wysaski makes a point of reblogging other people’s posts that he finds funny. He said he spends about two hours each day checking out other people’s pages. In fact, if you take a stroll through stream.pleated-jeans.com, you’ll find that the large majority of posts come from other members of the Tumblr community.

“There are so many people out there making good stuff that doesn’t get seen,” he said. “I try to make an effort to publicize that any way I can.

“I’m in a place now where I’ve gotten to be pretty well known and can start giving back. I’ve always placed original content as a priority. If I see a cartoonist making funny things, I want to give them exposure. I’m not just using Tumblr to promote myself. I’m part of a community. It’s my favorite website. I’m just participating like every other user would, sharing things I like.”