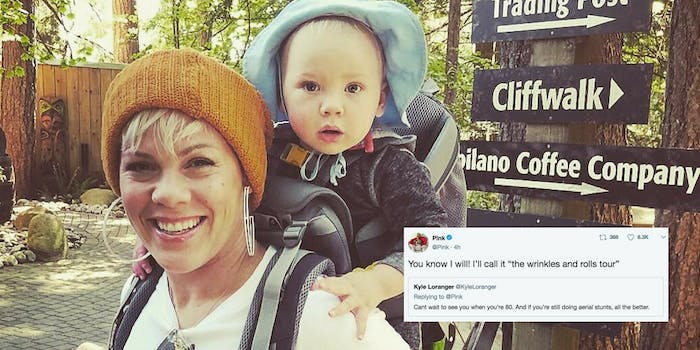 Pink shuts down troll who said she’s ‘so old,’ her name should be ‘Purple’

Pink delivered the perfect response to this age-shamer.

“Pink looks so old, she should be called Purple.”

That’s the unfunny, nonsensical jab that a Twitter troll tried to throw at Pink on Wednesday morning, only to be completely shut down by the pop star.

Responding to a radio station’s tweet about a girl who sang at a concert of Pink’s, the troll wrote the “purple” cutdown. Colorful wit aside, however, the heckler’s taunt doesn’t seem to make much sense—is purple just an “old” shade of pink? Did he mean that people get more vibrant, or darker, as they age?

Wow Pink looks so old that should be named Purple instead

Regardless, it was a jab meant to take aim at Pink’s age, reinforcing the idea that entertainers, specifically women, are only valuable and deserve their status when they’re young. It’s a fear ingrained in celebrity culture, surrounded by costly age-defying products and procedures used to avoid the look of “age” even beyond retirement.

The painful reality is best satirized by a skit from Amy Schumer’s Comedy Central show, during which she stumbles upon Tina Fey, Patricia Arquette, and Julia Louis-Dreyfus celebrating Louis-Dreyfus’ “last fuckable day”—the day when the entertainment industry decides that women are no longer valuable for their looks—a day that never comes for men, the sketch points out.

Much to this troll’s misfortune, Pink doesn’t back down. In response to his ignorant comment, Pink told him that “there are a few people left in the world that choose to age naturally,” and she’s earned “every fucking minute of my 38 years,” before taking him down a peg by calling him her “little purple troll.”

You must be from la. Well, there are a few people left in the world that choose to age naturally. And I’ve earned every fucking minute of my 38 years. How you lookin though? Cause I never heard of ya til you put my name in your mouth. I shall call you little purple troll. https://t.co/3WcH2TRrHW

She went on to tweet that she’s of the mindset that growing old is a blessing, and that it shows someone has enjoyed life.

“I pray I look older in 10 years, cause that will mean I’m alive,” Pink wrote.

Supporters of the pop star responded positively to her take down, calling out the troll for continuing the gross objectification of women in the industry.

You are real. In this fake and pretend world you always has been. Motherhood and age has come to you in most wonderful way. +Beautiful than ever

You are Fucking Perfect!!! As is your response!!!!!

Several of Pink’s fans cheered at the concept of her still kicking and screaming on stage at nearly 40—aerial stunts included.

“You know I will! I’ll call it ‘the wrinkles and rolls tour,'” she responded.

You know I will! I’ll call it “the wrinkles and rolls tour” https://t.co/DMXdgyu3dB