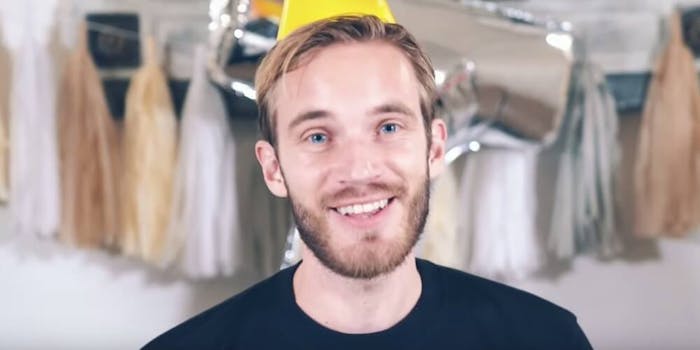 His fans are celebrating the milestone.

PewDiePie, YouTube’s most popular star, has hit 100 million subscribers, making him the second YouTube channel and first YouTuber to reach the coveted milestone.

The announcement comes after a back-and-forth competition with T-Series, a music record label in India, to be the first YouTube channel to cross the marker. In May, T-Series ended up making it to 100 million subscribers first. In response, PewDiePie released a “congratulations video” that disses the music label.

The competition between the two YouTube channels was always contentious, with other YouTubers getting involved to help PewDiePie out. When it looked like T-Series might win the competition a few months ago, a “Subscribe to PewDiePie” meme campaign went viral. People placed the phrase on billboards, including in Times Square.

But PewDiePie pleaded with fans to end the meme after the New Zealand mosque shooter reportedly asked people to “Subscribe to PewDiePie” in his manifesto. This incident sparked an even larger conversation around the YouTuber’s past controversial comments. He has been criticized for anti-Semitic, racist, and sexist comments.

Despite the controversies, the YouTuber is still hugely popular for his “unfiltered” and “comedic” commentary on video games like Minecraft. So when the news broke that the PewDiePie had finally reached 100 million, many began celebrating.

“Bro more then 1% of the earth’s population is subbed to #pewdiepie. That’s kind of a massive flex,” one Twitter user pointed out.

Me and the boys waiting for #pewdiepie to tell Sven and his family that he reached 100mil subscribers. pic.twitter.com/DpSwFFHm8a

Needless to say, PewDiePie is having a great August. He announced his marriage to longtime girlfriend Marzia Bisognin on Aug. 20.

“CONGRATULATIONS FELIX. He got married and got 100 mil subs in a single month. I am so proud of him,” Twitter user @MissEver_ wrote.