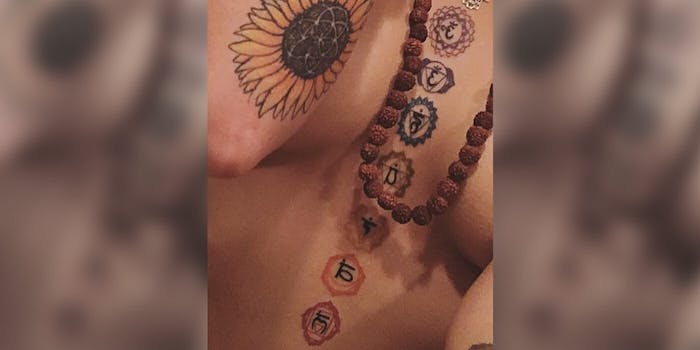 Paris Jackson, the late Michael Jackson’s 19-year-old daughter, took to Instagram this weekend to show off a new tattoo—or seven.

In a post on her named account, she parted her clothing a little to show off a column of seven symbols tattooed down her chest, along her sternum.

Fans who follow her @shittyextraterrestrial account got a slightly closer—and slightly less clothed—view in a separate post. It’s clear in this view that the symbols are each of the seven chakras, the energy centers recognized by some Eastern traditions.

People magazine screengrabbed the model’s topless Instagram story and contextualized her latest reveal: Jackson has over 50 tattoos, many of which she has shown off in topless photos on the social platform.

In 2016, Jackson made a statement on Instagram defending her frequent revealing posts, saying “being naked is part of what makes us human. for me it helps me feel more connected to mama gaia. … it is who i am and i refuse to shy away and keep my beliefs a secret.”

It must not have scared off too many, as her latest reveal was public to some 2 million followers.