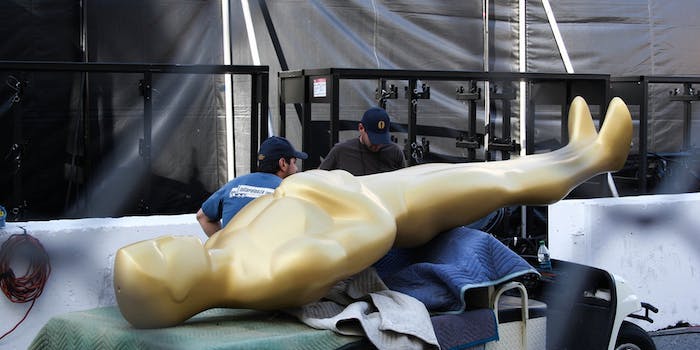 A handy guide for the Hollywood-averse.

The night of the Oscars, after the Super Bowl, is my favorite American holiday. Traditionally, I observe both occasions by going out while everyone else is hunkered down in their darkened living rooms, unaware of the world beyond. As the rest of the country watched Seattle dominate Denver last month, my wife and I enjoyed having an entire movie theater to ourselves for a screening of Nebraska. It’s not often you can put your feet up at Lincoln Center Plaza.

The Academy Awards telecast is not quite an all-day affair, but it still runs long. Last year’s ceremonies clocked in at three hours and 35 minutes, while the record-setting 2002 broadcast stretched to four hours and 20 minutes—a well-executed joke from some pothead producer, no doubt.

Even if they manage to wrap it up on the early side, there’s plenty you can do in the time it takes to get from the red carpet to the Best Picture envelope.

It features a screenplay from Gore Vidal, gratuitous scenes of Roman sex/violence shot by Penthouse’s founder, and perennial Oscar loser Peter O’Toole as the leprous Tiberius. Plus, a sometimes-nude young Helen Mirren!

2) Fly back and forth between two Scottish isles—134 times.

Loganair offers what’s considered the shortest regular commercial flight on the planet: a jump between the Orkney Islands of Westray and Papa Westray that can last as little as 47 seconds, start to finish. Sure, it might get a little nauseating after your 50th round trip, but you really can’t beat that view of, uh, some fields.

Just know that you may not be pleased with the result.

4) Wait in line for a ride at Disneyland.

No Fastpass, no problem. We can’t promise that the actual ride is any good, however.

According to Ayurvedic physician Dr. Sivakumar Varma, you can greatly improve your health by waiting 210 minutes between eating dinner and going to sleep—that way your digestive tract has adequate time to do its thing. How you actually spend that period is up to you: staring hungrily at food, I guess.

What is a three-minute egg? Nobody really knows. The only thing we’re sure of is how long they take to prepare. (It’s all explained in the YouTube clip below, which for some reason is four minutes long). After you cook 70, well, you’ll likely have gotten the hang of it. Then it’s just a matter of figuring out which neighbor’s house to chuck them at.

7) Pronounce the longest word in English.

The term “Methionylalanylthreonylserylar…,” etc., refers to a kind of protein and contains 189,819 letters. All of those letters are helpfully listed right here, for you to pronounce over the course of three-and-a-half hours.

If that’s a bit daunting for your tastes, then just listen to this guy do it for you, albeit in a way that makes the word sound like Serbian gibberish.

Or, if you’re normal, just struggle to solve the first one until you pass out from sheer frustration.

But enough from me—you can come up with lots of great time-killers yourself. Remember, there’s no idea as boring and wasteful as the Oscars themselves. So what if you have nothing to say around the watercooler on Monday? At least you got something done.