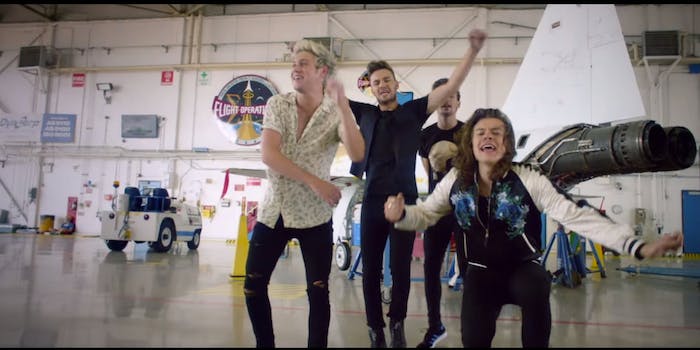 Directioners aren't worried; they've been through this spin cycle before.

The end is near—for One Direction, that is. So where’s the teenpocalypse?

The world awoke this morning to “news” that One Direction will be breaking up—a shocker headline quickly modified by the details that “breaking up” means going on a yearlong hiatus beginning in March 2016 to pursue solo projects. The split would follow the release of One Direction’s fifth album, rumored to be a compilation, and the more significant end of the band’s contract with Sony and Simon Cowell.

But despite attempts to spin the news as an apocalypse event for Directioners, the band’s fans have generally been responding without any signs of hysteria:

On Twitter, fans quickly took over the “insult” hashtag about the breakup to destress and make light of the rumors.

HATE ON US . WE DON'T CARE . WE'RE JUST PROUD TO BE THE BIGGEST FANDOM EVER ! Oh & 1D aren't breaking forever #OneDirectionIsBreakingUpParty

Wherever you look on the Internet this morning, there appears to be a decided lack of teenage tears, particularly compared to the fandom implosion when Zayn Malik left the band in March.

Why? A couple of reasons, actually:

Though this morning’s unsourced rumor originates from British tabloid The Sun, the exact same rumor already made the rounds of British tabloids back in late May and early June, including at The Sun, which first predicted the break would happen this fall instead of spring.

So all of the freaking out that you might have expected the fandom to be doing now has already happened. Fans have already analyzed the rumors and moved on, as this post from back in June indicates:

2) The band refuses to confirm that it’s true

Both now and in June, spokespeople and publicists for One Direction have refused to confirm the rumors, calling them “speculation.” Additionally, no members of the band have commented on the rumor

And while you might assume that means the rumors are true, there are plenty of 1D fans who won’t say it’s over ’til it’s over.

Plus, there’s this tweet from band member Liam Payne, made shortly after Malik’s departure:

As we’ve indicated, the reactions from fans have mostly been subdued, but the media has never needed an excuse to stereotype fangirl hysteria. Thankfully, more and more people are recognizing that for the sexist narrative it is. After all, when Malik left the band, One Direction fans were generally supportive. One thing they did not do was commandeer an armored vehicle and advance on Modest Management headquarters to protest his exit, like incensed adult fans of Top Gear did in March after host Jeremy Clarkson was suspended from the program.

Before you laugh at 1D fans crying at split rumours, remember 1m 'adults' signed the Clarkson petition. And drove a tank to the BBC offices.

The 1D news makes me want to do a TV segment where I interview a "behavioral specialist" about male sports fans freaking out at a lost game.

4) Even if the band does split, that can only be a good thing

One of the ongoing complaints from fans over the years has been that the strict regimented contract that the band has been under for the last five years limits their freedom and creativity. Beneath all the pop glitz, the members of One Direction are quite talented: Several play numerous musical instruments, and they have each contributed music or lyrics for their albums. Member Louis Tomlinson has long expressed hopes of returning to the band’s origin stage, X Factor, as a judge. And Malik, of course, has been turning heads with his first single, even before its proper release.

A break to work on solo projects—even if it turns out to be a permanent break—will probably give the four artists a chance to prove they have the creative chops to make lasting careers outside of the boy band phase.

Meanwhile, the band’s latest music video, “Drag Me Down,” released last week, has been grabbing attention for its collaboration with NASA. Here they are performing the song live earlier this month:

One thing’s clear: no rumors are going to drag these four bandmates—or their fans—down.

Update 5:40pm CT, Aug. 24: Band member Niall Horan has confirmed on Twitter that the band will take a “well-earned’ formal hiatus as speculated:

Ok so Lots of rumours going round. We are not splitting up, but we will be taking a well earned break at some point next year

Don't worry though, we still have lots we want to achieve ! Can't wait for you to hear all the new music we have for you and to perform

Some new songs as the tor continues! Love you all xx

*tour I should say

The advance notice should hopefully give fans plenty of time to prepare for the hiatus.