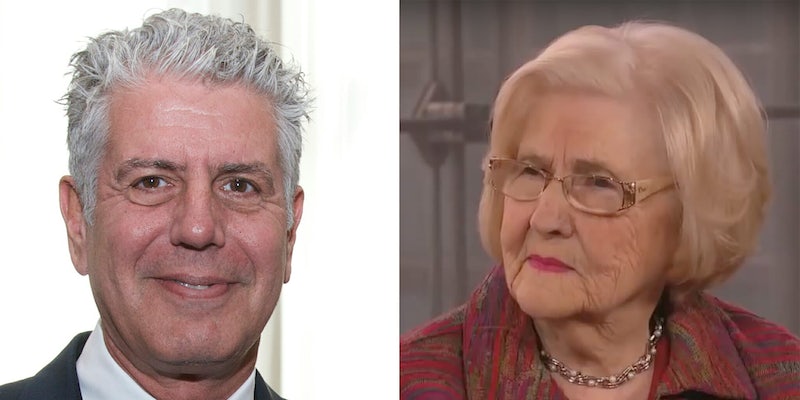 Bourdain supported her work when other critics scoffed at her.

As the world mourns the death of food critic and world traveler Anthony Bourdain, one fellow journalist remembers him as the man who supported her writing when the internet wanted to make a mockery out of her.

Marilyn Hagerty, a 94-year-old food critic hailing from Grand Forks, North Dakota, wrote a viral review in 2012 about Olive Garden. In her review, she sang praises for the chain restaurant, which had just opened up a franchise in her hometown, calling it the “the largest and most beautiful restaurant now operating in Grand Forks.”

Hagerty had a clearly outstanding experience at Olive Garden and spoke warmly of the restaurant. Of course, food snobs everywhere who read the review online thought it was hilarious. But while most critics were cracking snarky jokes and belittling Hagerty’s review, Bourdain found resonance and relatability in it. He recognized that she was a beacon for the Midwest masses and her reviews were representative of true culture found in the U.S.

Don’t forget the time Anthony Bourdain wrote the touching forward to legendary Olive Garden reviewer’s Marilyn Hagerty’s book. While everyone else was busy making fun of Marilyn, Anthony saw the beauty in her simple honesty and love of food. That’s what set him apart

“Anthony Bourdain spoke up for me at a time when people all over the country were making great fun of the column I write,” Hagerty told BuzzFeed News. “To have a man of his stature rise up and befriend me, it meant a lot to me.”

In 2012, Bourdain tweeted about her review and stood up for it.

“Marilyn Hagerty’s years of reviews to be a history of dining in the America too few of us from the coasts have seen,” he tweeted. “We need to see.”

Marilyn Hagerty's years of reviews to be a history of dining in the America too few of us from the coasts have seen. We need to see.

Eventually, she and Bourdain met for coffee in New York, and he helped her land a book deal, offering to edit it and write the foreword.

“She is never mean—even when circumstances would clearly excuse a sharp elbow, a cruel remark,” he wrote in the book, which is a collection of her restaurant reviews. “In fact, watching Marilyn struggle to find something nice to say about a place she clearly loathes is part of the fun. She is, unfailingly, a good neighbor and good citizen first—and entertainer second.”

Bourdain approached Hagerty’s writing the same way he approached cultures from all over the world—with thoughtful and tender interest, and with an open mind. His simple act of an East Coast critic embracing Midwest culture with open arms is a sentiment everyone in the U.S. should practice when approaching different sectors of the country.

In 2012, Marilyn Hagerty wrote a glowing review of the new Olive Garden in Grand Forks, North Dakota. And while the internet laughed at Hagerty, one person came to her defence — Anthony Bourdain #TheMoment pic.twitter.com/NAkiAMxvn5

Hagerty, who said she was sad to hear the shocking news of his death, told BuzzFeed she would always remember Bourdain fondly.

The Grand Forks Herald—the paper Hagerty writes for—wrote Bourdain an obituary on Friday, focusing on his relationship with her.

Editor’s note: This article has been revised to remove similarities and one line inadvertently taken from BuzzFeed’s original report. We regret the error.