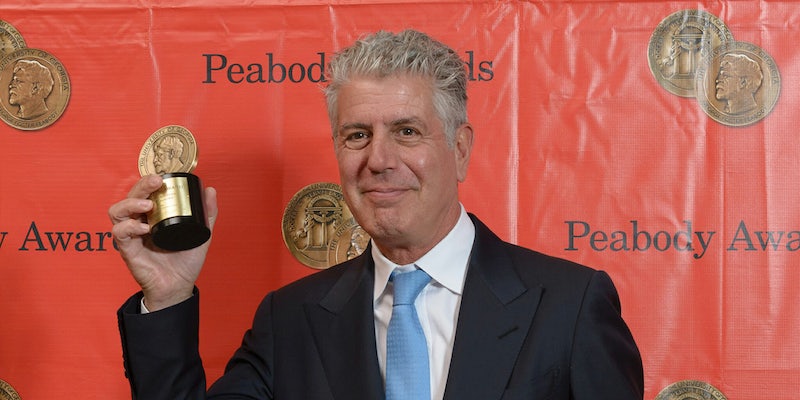 Family, friends, and fans of Anthony Bourdain—world-renowned chef, traveler, and Emmy award-winning storyteller—awoke Friday morning to the news that he was found dead by an apparent suicide.

As girlfriend Asia Argento and fellow co-workers of Bourdain at CNN shared their feelings of grief online, viewers who followed Bourdain throughout his foodie adventures around the world dived into select passages written by the 61-year-old and shared the ways that Bourdain inspired them throughout his almost 20-year-long stardom in the culinary industry.

“Barbecue may not be the road to world peace, but it’s a start”
–@Bourdain
RIP Tony. You will be dearly missed.#AnthonyBourdain #devastated pic.twitter.com/uwT16SM3zk

"In America, the professional kitchen is the last refuge of the misfit. It’s a place for people with bad pasts to find a new family." — Anthony Bourdain https://t.co/oNDfOWdYeG

This passage from Kitchen Confidential, where Bourdain writes about eating his first oyster as a kid while on vacation in Arcachon, made me cry the first time I read it and has been inked in my brain ever since ❤️ pic.twitter.com/e84nlVmCZ4

Anthony Bourdain on humanity:
"Meals make the society, hold the fabric together in lots of ways that were charming and interesting and intoxicating to me. The perfect meal, or the best meals, occur in a context that frequently has very little to do with the food itself." RIP pic.twitter.com/0CWxbTcF8V

Bourdain on writers made me laugh, on this otherwise dark day https://t.co/8Q5e3ImbLR pic.twitter.com/7aWoJjrrR5

This is a major loss. RIP Anthony Bourdain! "Your body is not a temple, it's an amusement park. Enjoy the ride." pic.twitter.com/YJAHY2kssx

“Maybe that’s enlightenment enough: to know that there is no final resting place of the mind; no moment of smug clarity. Perhaps wisdom…is realizing how small I am, and unwise, and how far I have yet to go.” —Anthony Bourdain

Incredibly saddened by the loss of Anthony Bourdain. “Without experimentation, a willingness to ask questions and try new things, we shall surely become static, repetitive, and moribund." Travel on @Bourdain …

RIP Anthony Bourdain.
"[When I die], I will decidedly not be regretting missed opportunities for a good time. My regrets will be more along the lines of a sad list of people hurt, people let down, assets wasted and advantages squandered." -Kitchen Confidential#anthonybourdain

This is the last graf of “Kitchen Confidential” by Anthony Bourdain. It’s a “r-rated” book for sure, but Bourdain lived an r-rated life. #broncosread pic.twitter.com/G3xyaVjsw3

For many, Bourdain’s careful and thoughtful approach to new cultures in his CNN show, Parts Unknown, inspired their own travels abroad.

That which differentiates us from others is not what drives the world apart but what has a deep, uniquely human power to bring us together.

May he be at peace. pic.twitter.com/hPUVpcSvzG

You inspire the way I travel. Thank you for your sense of adventure, your storytelling. You'll be sorely missed. #AnthonyBourdain

#AnthonyBourdain taught me how to eat and was my travel inspiration. A Cooks Tour: Vietnam was my ultimate destination. I’ll never forget this lunch and the man who inspired this adventure. pic.twitter.com/Mqw8LMuxqC

Some chose to celebrate his immense success in the industry at age 44 and the hope he gave to aspiring professionals.

I've rewritten this over & over. @Bourdain had a huge influence on my career even before I met him & worked w/ him. I talked about wanting a show like his when he was on the Travel channel, before he was regarded as the actual most interesting man in the world. #SuicidePrevention pic.twitter.com/nizOgpNibd

When people achieve great success at a young age it's inspiring, but the fact that Anthony Bourdain got his big break at 44 is something I think about often for motivation. I'll always look to him as a reminder that it's never too late for your second act. RIP

1. I don't usually follow or talk about celebrity culture/happenings/gossip, but this Anthony Bourdain news is really hard for me.

His success and creative brilliance, after having slaved in anonymous kitchens until he was 44, was an inspiration to me. He was an amazing story.

Others celebrated his support of the #MeToo movement.

anthony bourdain welcomed the complicated work of being an ally and engaging with #metoo. he asked questions that were hard to ask and encouraged other men to as well. he wasn't perfect at it, but he did the work. more men need to do the work

heres what he told me in january: pic.twitter.com/7xhWtUP4l8

Anthony Bourdain had recently been outspoken on #MeToo and #TimesUp. After his girlfriend Asia Argento came forward with accusations against Weinstein in the New Yorker, he tweeted: “I am proud and honored to know you." RIP. So sad. https://t.co/DW0tHkGEuE

When I interviewed Anthony Bourdain about #MeToo & restaurant culture, I was really impressed by his curiousity & ability to listen & engage—rare qualities in anyone, let alone someone so famous. He also seemed to legitimately want to examine himself. RIP https://t.co/UFbPFJpy82 pic.twitter.com/6fKaHxHg24

One more aspect of @Bourdain's life that shouldn't be overlooked: He spoke up about #MeToo without ambivalence and with eloquence and with remorse. I loved "Kitchen Confidential" in 2000 but this piece from December is even better https://t.co/CnH4i3ASt3

“It is with extraordinary sadness we can confirm the death of our friend and colleague, Anthony Bourdain,” CNN said in a statement on Friday morning.  “His love of great adventure, new friends, fine food and drink and the remarkable stories of the world made him a unique storyteller. His talents never ceased to amaze us and we will miss him very much. Our thoughts and prayers are with his daughter and family at this incredibly difficult time.”