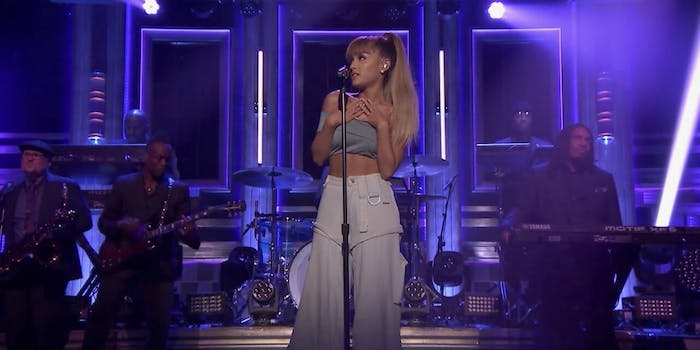 Ariana Grande carries on with One Love Manchester benefit concert

Watch it here, for free.

Less than two weeks after a suicide bombing rocked her concert in Manchester, England, leaving 22 people dead and more than 100 wounded, pop star Ariana Grande has returned to the United Kingdom for the “One Love Manchester” benefit concert on Sunday.

While she’s the featured performer, she’s far from the only big name in attendance: Miley Cyrus, Katy Perry, Coldplay, Pharrell, and Justin Bieber are also reportedly in attendance, among others. Together the performers will raise funds to support the victims of the Manchester bombing and their families, all in the immediate aftermath of another, separate attack in London this weekend.

It’s Grande’s first performance since the Manchester tragedy, although not her first time back out in public―she visited some of the victims of the attack at the Royal Manchester Children’s Hospital on Friday. As the Guardian detailed, the father of one of the victims, Peter Mann, was overjoyed that Grande took the time to help soothe his daughter Jaden.

This means more to us than all the amazing things people have done this week. When your daughter asks after her 2nd operation: ‘Is Ariana OK?’ So happy she came i could burst! Never seen Jaden so happy! Even cried again myself.

The show began at 2:00pm ET, and people who aren’t in attendance can still watch the whole thing, as it’s being streamed live and for free, via YouTube. Check it out below: