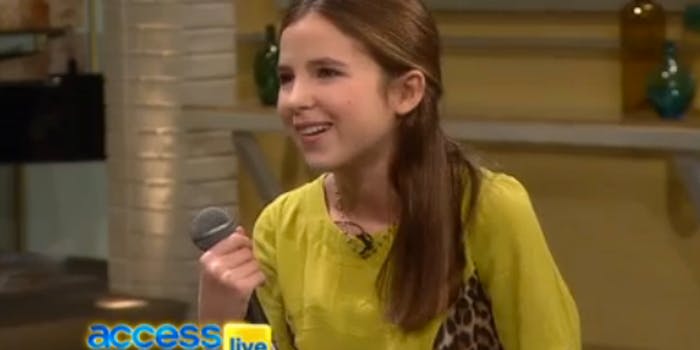 Put on your stretchy pants, it’s the beginning of the Nicole Westbrook charm offensive.

The 12-year-old YouTube celebrity performed her viral hit “It’s Thanksgiving” (a week early!) on Access Hollywood Live Thursday. Since it was uploaded last week, the video has racked up more than 8 million views, which makes it a verified hit on the YouTube charts.

However, the true test of stardom for Westbrook was surviving the insipid questioning from hosts Billy Bush and Kit Hoover. A clearly nervous Nicole did well on the live syndicated show, calling her experience in viral stardom “exciting”—multiple times.

“Sometimes I feel like I’m dreaming,” said an excited Westbrook. “I never thought in a million years I’d have that many views.” She also said her schoolmates were very “excited” for her but sadly didn’t mention whether she’s met her fellow ARK Music Factory victim, Rebecca Black.

Westbrook said the song’s success was due to the subject matter being so relatable.

“It’s all about being grateful, and not hateful,” she said, followed immediately by a smirk because she was so proud that line. Haters! Stuff them, right Nicole?

Westbrook was joined by Ark Music Factory producer/singer Patrice Wilson who maintained the image of the creepy, uninvited dinner guest that he established in the original “It’s Thanksgiving” video. Their performance was as good as it was going to get from a heavily auto-tuned song about Boston Market menu items.

Have a listen, but don’t say we didn’t warn you that you might want to climb into an oven afterward.