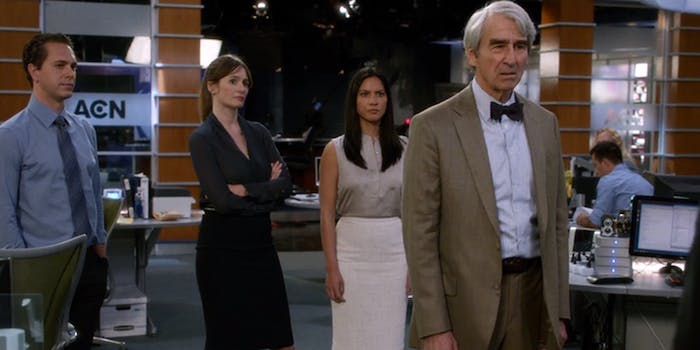 Season 3 of The Newsroom is coming to a close, and last night’s episode couldn’t have been more poorly timed.

One of the narrative threads of “Oh Shenandoah” was that of a college student who claimed she was raped. Don Keefer (Thomas Sadoski) is tasked with producing a segment, and he struggles with how to approach it, especially within Lucas Pruitt’s (B.J. Novak) new millennial regime.

An undergrad at Princeton has created a website for students who have been sexually assaulted but don’t have enough evidence to come forward. Victims can name accusers there; Pruitt wants the victim and her accused rapist to come on ACN together, which both Don and Sloan (Olivia Munn) agree is a terrible idea.

Keefer does some “detective work” to find Mary, the woman who runs the site, and interrogates her in her dorm room about the night she was raped. Keefer asks if maybe the website could be used for “revenge.” Perhaps someone would make up a story and attempt to ruin a man’s life. After some trademark Sorkin back-and-forth, Don attempts to talk her out of coming forward on the show, claiming she’ll be “slut-shamed” and that “teams” will be formed.

It’s an unfortunate approach to the subject, and it collided with a weekend in which Rolling Stone tried to backtrack on its feature story “A Rape on Campus” and a troll disguised as a journalist posted the personal info of the story’s alleged rape victim.

Newsroom writer Alena Smith took to Twitter last night to give a little background on the episode, including the fact that she was “kicked out” of the writers’ room when she attempted to argue against the storyline. (The Daily Dot has reached out to Smith for comment.)

As New Yorker writer Emily Nussbaum points out in her review of the episode, The Newsroom’s depiction of women is often frustrating, and Sorkin’s not known for giving them room to argue their case, though she notes both Sloan and Maggie (Allison Pill) have stepped up in that area in season 3. She outlines how arguing with Sorkin’s storylines often turns the viewer into a Sorkin character. But then there’s this:

Don’s right, of course: a public debate about an alleged rape would be a nightmare. Anonymous accusations are risky and sometimes women lie about rape (Hell, people lie about everything). But on a show dedicated to fantasy journalism, Sorkin’s stand-in doesn’t lobby for more incisive coverage of sexual violence or for a responsible way to tell graphic stories without getting off on the horrible details or for innovative investigations that could pressure a corrupt, ass-covering system to do better. Instead, he argues that the idealistic thing to do is not to believe her story. Don’s fighting for no coverage: he’s so identified with falsely accused men and so focussed on his sorrowful, courtly discomfort that, mainly, he just wants the issue to go away.

In another of the episode’s storylines, Sorkin defends celebrities’ privacy and has Sloan eviscerate a millennial employee who created a celebrity-stalking app. Erin Andrews, the woman tracked on the app, must be defended, because she’s famous. The college student who was raped must be tracked down in her dorm and interrogated.

Sorkin, ever the mansplainer, has never had a grasp on how to portray women if they’re not there to make men better and elevate them to greatness. (See Amy Schumer’s fantastic Sorkin spoof for proof.) Don is threatened by an anonymous website that could be used to falsely accuse men and ruin their lives. Don is a stand-in for Sorkin. Sorkin was threatened by a female writer who questioned his storyline.

Men are the heroes in Sorkin’s world. Don was a hero for making a moral judgement and saying he believed the man accused of rape. The accuser is treated with suspicion. At one point, Don tells Mary “what kind” of rape she experienced.

It was a reminder of how the media treats victims, and the value it puts on their stories. Yes, we should be questioning rape victims. But last night’s episode showed Hollywood still doesn’t know how.