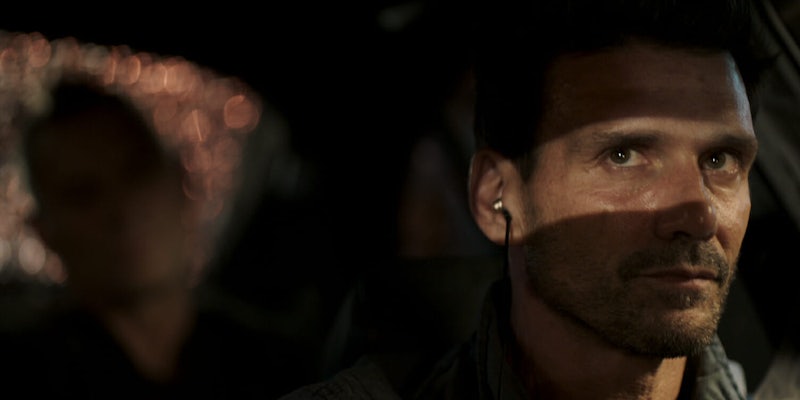 More 'French Connection' than 'Fast and Furious,' this Netflix action film is a ride worth taking.

Fresh off a three-year stint in prison, an unnamed getaway driver (Captain America: Civil War’s Frank Grillo) is back behind the wheel and eager to pay down his debts. Tonight’s job should have been simple: pick up two associates, drive them to a bank, then drive them to the drop with a bag full of stolen money. But things go pear-shaped mid-heist when a third party enters the mix, forcing the Wheelman to deviate from the plan. Now he’s at large with two-hundred grand in his trunk and some very bad people eager to get their hands on that money. It’s bad news for both the Wheelman and his family.

Produced by Grillo and Joe Carnahan (Smokin’ Aces, The Grey), Wheelman marks the feature directorial debut of filmmaker Jeremy Rush. While the title might conjure images of Fast & Furious-style automotive chaos, Wheelman draws its influences more from ‘60s and ‘70s fare like The French Connection and Bullitt. While there are definitely some nail-biting sequences, most of the action is fueled by the story’s twists and turns, not by fancy vehicular stunt work.

Part of this stems from Rush’s decision to contain the action almost entirely within, or in the immediate vicinity of, the car. Indeed, almost every minute of Wheelman unfolds with the title character in the driver’s seat, whether creeping through back alleys or whipping around tight turns, swapping gunfire with a pursuer. It’s a stylistic choice that could have backfired, but instead it works out marvelously, keeping the audience quite literally in the same place as the protagonist. During the moments when the Wheelman does leave the vehicle, with few exceptions we watch events play out from a distance, a conceit that very much makes the car a character in and of itself—even though we don’t really even get a good look at the outside of it until late in the film.

With such a claustrophobic setup, Wheelman hinges entirely on having a compelling lead behind the wheel, and Grillo hugs those turns very well indeed. As his situation spirals out of control, Grillo balances tough-guy swagger, steely professionalism, and glimpses of a sympathetic family man just trying to make up for past sins. He’s like a less terse, more likable version of Ryan Gosling’s character from Drive—a comparison that seems inevitable, even though Wheelman is a very different film.

Most of the other major characters in the film are seen only briefly, or heard primarily over the Wheelman’s phone as he crisscrosses the dark cityscape. The always-welcome Garrett Dillahunt puts in a short but memorable appearance as one of the Wheelman’s associates, and Caitlin Carmichael makes the most of her third-act stint as the Wheelman’s daughter, Katie.

While the general arc of Wheelman’s narrative route will be apparent from early on for most viewers, Grillo’s charismatic performance ensures that the trip is never boring. The film sputters a bit in its second act, but that’s only because that’s where the Wheelman is most focused on figuring out who double-crossed him, and why—questions that are never as interesting as what he intends to do about it. Still, with a brisk 82-minute runtime, Wheelman never idles long enough to cause any real problems.

A mix of slow-burn tension, clever and well-staged claustrophobic action sequences, and a magnetic lead performance from Grillo, Netflix’s Wheelman is a ride well worth taking.