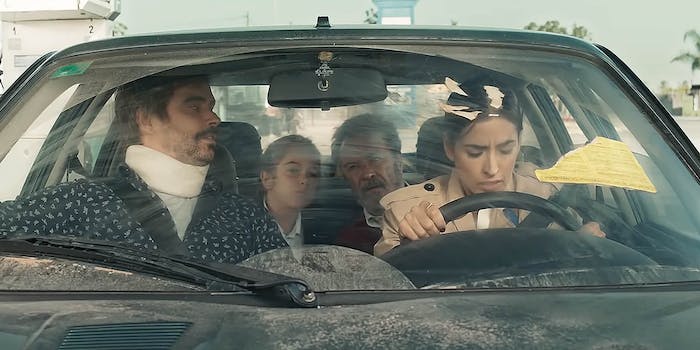 'Vivir Dos Veces' hits its stride in the back half as it lives up to its thematic potential.

Movies about people struggling with Alzheimer’s are tough, man. Whether they’re good or bad, they can usually find at least a moment or two of power. It’s an easy way to get an audience’s sympathy. But the best versions of this movie reach a place of such deep empathy that they become cathartic for the characters and the audience. The Notebook, Still Alice, and Away From Her, among many others, work so well for a reason. Caught between lighthearted comedy and heavier domestic drama, Netflix’s Vivir Dos Veces, which translates to Live Twice, Love Once, earns its place among those titles. What starts out as a story about a man looking for a long lost love ends as a painfully beautiful rumination on missed connections, reconnections, and letting go.

As Emilio begins his battle with Alzheimer’s, he sets out to reconnect with a long-lost crush.

Through the first 30 minutes of the film, I was sure Vivir Dos Veces was going to be a saccharine dramedy. The comedy wasn’t working, and the relationship that anchors the story seemed paper thin. “Maudlin” kept popping into my head, I even wrote it in my notes. I was dreading the ending of the film because it was going to pull at heartstrings, not bothering to earn its emotional denouement. As the three main storylines played out and the thematic connections revealed themselves, the sense of dread arrived. Only now, I didn’t want the film to end because it was going to make me cry. That seems fitting for a story about a man’s futile attempts to stave off Alzheimer’s.

The movie opens on the beach in summer time, Margarita sits on a dock. Behind her, Emilio smiles as he stares off into the water. The two teenagers are trapped in a moment they won’t forget, and they don’t even know it. It’s idyllic in the way only a memory can be. Jump to the present where Emilio (played by Oscar Martinez) is 40 or 50 years older and in the beginning stages of Alzheimer’s. At first, Emilio deludes himself into thinking he’s fine, that he’s as sharp as ever. But he’s not the only one in a state of denial. His daughter, Julia (Inma Cuesta), is slow to accept the inevitability of her father’s health. She’s also caught in a loveless marriage she refuses to end. Pride is a hell of a thing. Vivir Dos Veces’ strongest moments arrive when the characters confront their own futility.

Before his mind completely betrays him, Emilio decides to go find Margarita. There’s a lifetime of regret Emilio hopes to erase. As he hits the road with his tech-savvy granddaughter, Blanca (Mafalda Carbonell), the film takes on a farcical tone that doesn’t work. The dynamic between Emilio and Blanca acts more as a plot device than as a real relationship: Blanca’s primary function is to teach Emilio about the wonders of the internet and help use technology to dig Emilio, and the script, out of logistical holes. We’re well beyond the point where the old-person-struggles-with-basic-modern-technology trope has grown stale. Fortunately the film moves moves past this bit, but it never really figures out how to handle Blanca. She’s relegated to a device and easy comic relief. It’s disappointing, but things perk up for Blanca a bit as the story progresses.

Vivir Dos Veces hits its stride in the back half as it lives up to its thematic potential. Maria Minguez’s script builds its themes steadily, and once it drops the comedy and goes more dramatic, the film realizes its full potential. Martinez and Cuesta give strong performances, and they’re at their best as Emilio and Julia accept that the facades they’ve been clinging to have fully slipped away. While Emilio’s quest to reconnect with Margarita drives the story, Julia is the story’s heart. She gets most of the film’s best moments and Cuesta is pitch-perfect in these scenes.

Director Maria Ripoll knows how to maximize her film’s strengths. She allows scenes to linger to an extra beat or two, often in silence. The camera will stay focused on an actor’s face, and everything the characters are holding on the inside comes out. It’s a simple thing, but Ripoll paces it just right so that it feels like a private moment between the characters and the audience. As the film heads to its ending, Ripoll and Minguez let the comedy slip away and the full weight of the drama settles in. Any resistance I felt toward the movie faded as I let the ending work its magic on me. And it’s such a lovely ending. It’s not the treacly ending I assumed we’d get based off the start of the movie, nor is it a sledgehammer of devastation. Instead, they land on something perfectly melancholy.

I’ve said it before, and I’ll say it again now: The foreign movies Netflix acquires are often better than its domestic releases. Sometimes I forget that, but I always welcome a reminder. If you’re in the mood for something that a little sweet and a little sad, give Vivir Dos Veces a shot.