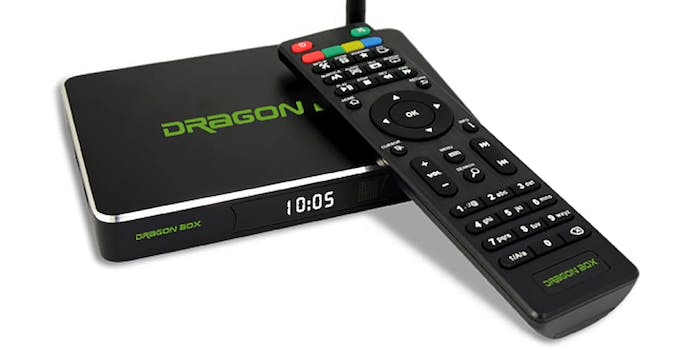 That buddy of yours who watched The Last Jedi on his couch isn’t going to like this.

Netflix and Amazon on Wednesday joined a Hollywood studio lawsuit against streaming platform Dragon Box. The box runs Kodi, a media player that can run illegal streams, and is being targeted for spreading piracy. It also advertises that it lets users “Stop paying for Netflix.”

Dragon Box CEO Paul Christoforo maintains that the technology is perfectly legal. As Variety points out, he’s written as much on his LinkedIn page: “It is legal to stream content on the internet… We can’t be held liable for the movies and TV channels online that people are watching because all the software is doing is accessing content that is readily available online.”

Yet, the $350 Dragon Box sells itself as a catch-all device that lets you “watch movies at home that are still in theatres!” And that’s not all, according to its website:

The Dragon Box will give you access to movies, TV shows, live sports, boxing and ufc events, live streams of your fav TV channels, and 3D movies all in HD! The movie selection is unlimited, if you’re looking for a classic like Pulp Fiction or even movies currently in the theater! Sick of waiting for your favorite TV shows to show up on Netflix? Wait no longer, you will have every episode the night it airs! Can you use an extra $60-$70 a month? What if you no longer had to pay for major sporting events such as UFC, Boxing, or WWE? Stream them all live in HD! Cancel your Dish or Satellite Provider. You do not need cable tv for the box to work all you need is an Internet connection and HDTV.

That could be read as a description for “a tool for the mass infringement of the copyrighted motion pictures and television shows Plaintiffs own or have the exclusive right(s) to reproduce,” as the suit claims. The lawsuit also claims that DragonBox posts Facebook updates where it advertises streams for new movies that haven’t even hit theaters.

The company boasts that it has 250,000 customers in the U.S., and the lawsuit seeks the maximum civil penalty.