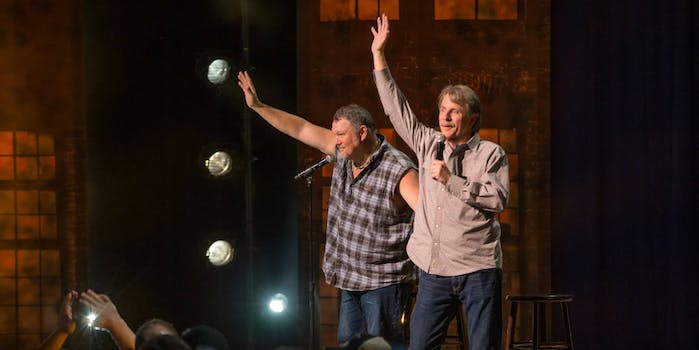 Even Larry the Cable Guy is getting another special.

The remaining slate of 2016 Netflix comedy specials was announced on Tuesday, and it rounds out the year with eight men.

So far this year, Netflix has released two standup specials from women: Ali Wong’s Baby Cobra, which debuted in May, and Sofía Niño de Rivera’s Exposed in June. Iliza Shlesinger’s previously announced special, Confirmed Kills, comes out Sept. 23. Compare that to the 22 total standup specials from male comics Netflix U.S. will have released by the end of 2016, including a new gut-buster this Friday from… Jeff Foxworthy and Larry the Cable Guy? So, technically, that’s 23.

When it debuted earlier this month, the top 10 most popular comedians on new comedy streaming app Laugh.ly were men. Founder Dave Scott remarked that it noticed this trend early on in the beta testing. It reinforces “that this is definitely a male-dominated industry,” he said. “Even when you look at top-selling albums of all time or most-followed comedians, women were rare.” (According to Klout, Ellen DeGeneres is the most influential comedian on Twitter, but she’s followed by a lot of guys.)

In terms of bridging this gap, Comedy Central might be doing a little better. While it’s also released specials from just two women this year, the channel has plans for half-hour specials from Aparna Nancherla, Jacqueline Novak, Naomi Ekperigin, Emily Heller, and Martha Kelly. Netflix had no official comment, but there’s also a possibility it’ll have more specials to announce in the future.

Cedric the Entertainer, Live From the Ville

Gabriel Iglesias, I’m Sorry for What I Said When I Was Hungry