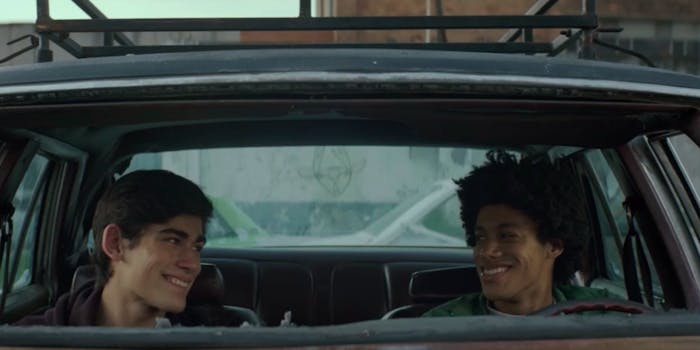 It sticks closely to the crime-action formula, but the Netflix film's exuberant performances make up for a lack of originality.

Is stealing an abominable crime that deserves indiscriminate punishment, or a necessary evil to level the economic playing field? That question propels much of Netflix’s new Pickpockets, a Colombian crime-action flick centered around two teenagers who struggle to get ahead on their own terms. This illicit lifestyle predictably lands them in some hot water, putting their skills—and loyalty to each other—to the test.

Pickpockets takes place in Bogotá and follows the ingeniously nicknamed Fresh (Emiliano Pernía) and Doggy (Dubán Andrés Prado), two best friends who have turned to a life of petty crime to pay their bills. This mostly consists of robbing well-to-do businessmen and delivering the goods to their boss, who gives them a pathetically small cut. Fresh and Doggy are competent thieves, but they’re sloppy, and lately, their altercations have escalated to violence, making them an easy target for the police. Something needs to change if they hope to keep fending for themselves.

Luckily, the two friends have an audience: Chucho (Carlos Bardem), a legendary pickpocket who fled his home and family in Spain and is hiding in Bogotá as he struggles to settle his debts. The elder thief sees potential in Fresh and Doggy, and he takes them under his wing to mold them into master pickpockets. The two protégés recruit Juana (Natalia Reyes), a feisty young graffiti artist for whom Fresh has fallen hard.

With a third member onboard, the team quickly gets its pickpocketing routine down to a science, scoring cell phones, jewelry, tablets, and huge wads of cash. Chucho takes a healthy percentage to pay off his debts and keep his pursuers at bay, but Fresh and Doggy are still raking in more money than ever would have been possible with their old crew. Eventually, though, they tire of this arrangement, as Doggy seeks to cut Chucho out of the picture and Fresh seeks a greater challenge, physically and mentally.

This ambition proves dangerous, both to the safety of the group and to Fresh and Doggy’s friendship. Fresh has convinced himself that his exploits are noble; he tries to put his earnings toward his family, but his mother wants none of his dirty money. Doggy, meanwhile, just wants to get rich, and he’s willing to do it by any means necessary. This conflict puts the trio in a few life-or-death situations, as they realize that bigger paydays come with higher stakes.

If any of this sounds familiar, it’s because Pickpockets follows the classic con artist/crime-action formula to a tee. Everybody’s working for somebody, nobody’s particularly happy, and they’re all fighting to get out of their line of work before it’s too late. The unoriginal plot might not seem as glaring if not for the frustrating lack of backstory. Does Doggy have a family? What about Juana? And why does Fresh like to steal people’s licenses and pin them to his wall? Viewers are never privy to this information, which makes it hard to empathize with Pickpockets’ characters.

Thankfully, Fresh and Doggy’s exuberant performances make up for the film’s narrative shortcomings. It’s thrilling to watch them race through the streets of Bogotá in an effort to outsmart the police, and their joy upon completing a successful theft is infectious. Likewise, Bardem’s gritty, somber performance as Chucho lends the film some much-needed emotional heft, while Reyes proves effortlessly charming as Juana, even if her relationship with Fresh lacks a spark.

Then again, it’s unlikely anybody’s going into Pickpockets expecting to see a film that revolutionizes its genre. They’re more likely seeking some cheap, high-octane thrills from a gang of smart-talking protagonists, in the vein of Joseph Gordon-Levitt’s bike messenger action film Premium Rush. If that’s the case, they’ll find plenty to enjoy here. Pickpockets may not draw any conclusions on the moral dilemmas of stealing, but it’s still fun to watch its characters grapple for answers.