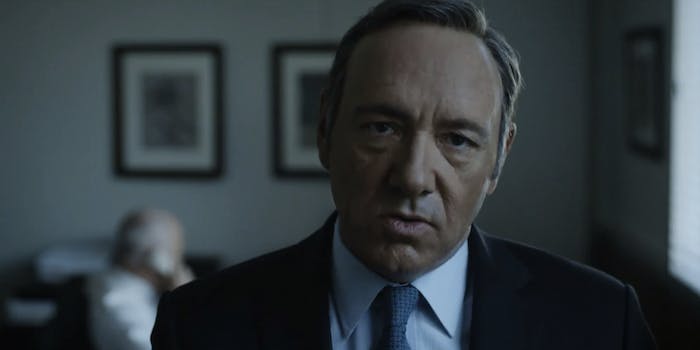 2015 is all about getting in a passionate relationship with your Netflix queue.

As the ball dropped and people bid adieu to the year the was 2014, folks around the world began examining their lives and figuring out how they can accomplish all their long-held goals in the new year. But save learning a new language or taking a trip to Europe for 2016, because this is the year you finally discover why your friends are still talking about Breaking Bad a year after it left the air.

Indeed, 2015 is all about getting in a passionate relationship with your Netflix queue and finding time to stream all the shows you’ve been putting off for so long. To help make this daunting task a little easier, we here at the Daily Dot have served up our recommendations for shows you need to stream—plus short primers on each series to make them far less confusing.

Previously, our staff compiled their recommendations for comedies you should be binge-watching in 2015, but it’s time to get serious about streaming, because the real meat of Netflix is lies in its drama selection. From meth-slinging chemistry teachers afflicted with cancer to sex-addicted ad executives from the 1960s, there’s something to satisfy any appetite. So stop procrastinating and get to watching, because you’ve got a lot of ground to cover. —Greg Seals

When it was announced that Sony would not be releasing The Interview due to terror threats from shadowy hackers, many people tweeted that it was like a scene out of Black Mirror. Indeed, that’s how close creator Charlie Brooker’s show mirrors reality, and since it landed on Netflix in December, the British sci-fi show has given a new audience something to obsess over. It’s a smart satire of media and technology that makes you laugh, then makes you squirm, and with just six episodes, it’s easy to lose track of time and fall into an emotionally unstable repeat-binge spiral. Supplemental viewing: Nathan Barley, Brooker’s 2005 sendup of bro-startup culture, which seems eerily accurate even a decade later. —Audra Schroeder

Breaking Bad is the kind of series where there’s not a lot to say about it that hasn’t already been said. Routinely called the greatest show of all time, this tale of a high school chemistry teacher turned meth dealer has quickly become a pop-culture institution, demanding of your attention and likely to stick around years after its conclusion. If it’s not the best show of all time, it at least definitely has the best pilot of all time, which will keep you on the hook for the rest of the truncated first season. From there, trying to stop watching is basically a futile exercise. It’s a breathlessly exciting, occasionally exhausting, all-around brutal ride, but by the time you’ve finished, you’re likely to know something you didn’t before about the nature of television—maybe even the nature of humanity. And that’s about as much as one can give away without further spoilers or hyperbole. —Chris Osterndorf

The most marketable premise in television history—a serial killer with a moral code (Michael C. Hall) murders other murderers when he’s not working forensics for the Miami police—is slowly run into the ground, but with many lurid delights along the way. The first season is a cheesy, standalone masterpiece; the second keeps you guessing; the third is a mess, no thanks to Jimmy Smits; the fourth is a smoldering creepfest, brought to you by a terrifying John Lithgow; the fifth is a near-brilliant return to form; the sixth is particularly hammed-up; and the seventh and eighth are simply embarrassing. For fans of stylized violence and slick gallows humor, it’s impossible to top. —Miles Klee

Much like the spaceship Serenity, Firefly somehow managed to chug on and thrive after all these years in the Internet community—and you could watch the entire thing in one ambitious day. The cult classic from Joss Whedon premiered in 2002 and aired just 11 episodes (out of order) before being canceled by Fox; three more came out in 2003. In 2005, it was the fans’ devotion that made Serenity, a film reuniting the entire cast to wrap everything up before wrap-up films were a thing (also required viewing if you pick up this show), and rumors of a revival from Netflix are near-constant.

Taking place in a future where the U.S. and China are the only two countries that expanded to space, the Western space opera (think Han Solo with an old-timey gun and cowboy boots) zeroes in on Mal, the captain of Serenity, and his crew as they run suspicious deliveries and drop-offs. They pick up River and Simon Tam, two siblings on the run from the ever-present (but rarely glimpsed) Alliance. It’s a mix of Western and Eastern cultures and manages to turn a few gender roles on its head along the way. (You also get a clear shot of Nathan Fillion’s rear end, which is never something to complain about.)

It’s also a good exercise in separating actors from the characters they play. Adam Baldwin plays fan favorite Jayne, but his viewpoints about Gamergate may have ruined Firefly for some long-time fans; he even coined the now-infamous name. —Michelle Jaworski

Fair warning, it does take a little bit of time to get into Friday Night Lights. It’s good right away, with a uniquely chaotic shooting style for network television, but the football storylines may hold less initial appeal to non-sports fans. However, somewhere in its first season, the show goes from good to great, seemingly within the blink of an eye. It does make a few missteps in season 2, but once you’ve already fallen in love with it, falling out of love with it is almost impossible.

Most astounding of all though, the show goes through a major overhaul in the second half of its run and somehow comes out even better than it was before. Which is probably because no matter whose storyline it’s covering, Friday Night Lights manages to cram more pathos, heartbreak, and triumph into any given episode than most other shows do into an entire season. And yes, it does that while never veering away from its central focus of small-town football.

Also, as far as the ensemble goes, this was the show that (re)introduced us to Michael B. Jordan and gave us the single best marriage in the history of television, that of Coach (Kyle Chandler) and Tami (Connie Britton) Taylor.

Always an underdog while it was on the air, Friday Night Lights is a testament to the lasting impact a show can have when allowed enough time to grow into its own. Again, know going in that you don’t have to like football to love the show, but that you will root for the characters through thick and thin. Oh, and remember: Clear eyes, full hearts, can’t lose. —Chris Osterndorf

It’s widely known that our nation’s capital is a city of backroom handshakes, empty promises, and plenty of corruption. But it’s wasn’t until Beau Willimon brought the popular British political drama House of Cards stateside that we discovered exactly how far some people are willing to go for a taste of power. Centered on Frank Underwood and his equally calculating wife Claire, this examination of the seedy underbelly of D.C. toes the line between Shakespearean tragedy and political thriller, thanks to sardonic asides and gritty cinematography.

But don’t mistake this for just another political drama. This original piece of programming has wider implications. Thanks to all-star talent like Executive Producer David Fincher and an A-list cast helmed by Kevin Spacey and Robin Wright, this Netflix original hit proved that streaming services and their original content are changing the way people watch TV. —Greg Seals

The nine-part, 680-minute documentary series is often considered Burns’ best and is a great starting point for anyone looking to get into his films. When you’re done with it, you’ll find yourself listening to the soundtrack on the subway and getting far too emotional. Or even quoting a Southern general at the end of an article you wrote for the website you work for.

Note: If you want something shorter and a bit more fun, watch Burns’ Prohibition (also on Netflix). —E.A. Weiss

Sept. 22, 2004. A few hundred people got on a plane in Sydney, heading to Los Angeles, and nothing was ever the same—for the passengers, for TV viewers, or for serialized sci-fi television.

At its core, Lost was about the characters: A bunch of strangers, linked by something too precise and too distinct to call just fate. Trapped on a mysterious tropical island together where a polar bear on the loose is the least of everyone’s worries; the show manages to tie in philosophical figures, time travel, the supernatural, the question of whether you can change future events from happening, life and death, and so many theories. It was weird and weirdly addictive, with people binge-watching before that phrase even entered our collective vernacular.

Lost started in a pre-Twitter world, but it would’ve easily thrived on social media, and it remained a heated debate once people started to talk about it there. And more than four years after the final episode aired, people are still debating the ending. —Michelle Jaworski

How do you find meaning, truth, and happiness in an age of excess, emptiness, and turbulence? While that might sound like a opening line pulled straight from one of Don Draper’s poetic pitches, it’s actually the central question that Matthew Weiner’s stirring 1960s drama seeks to answer. The critically acclaimed series, which centers on the troubled lives of New York City ad executives, single-handedly brought AMC back from the brink of despair. With masterfully shot scenes that thrive on quietness and moving monologues delivered in boardrooms to clients like Kodak and Jaguar, it’s clear to see why critics count this show as a main tenet of TV’s golden age.

Aside from being an award-winning drama, the show is a visual feast, with set dressings and costumes so perfectly assembled you’ll want to reach for an ashtray and a pack of Lucky Strikes. With only seven episodes left till Madison Avenue’s infamous Sterling Cooper and Partners close their doors, now is the perfect time to catch up. —Greg Seals

If you haven’t watched The West Wing yet, what are you waiting for? You might be hesitant, like I was, because it’s one of those shows that really obnoxious people are obsessed with and you don’t want to relate to them on any level. But here’s why you should give in: Aaron Sorkin’s late-’90s masterpiece manages to be sexy while having little to do with actual sex. Sure, there’s tension between White House staffers and season 1 kicks off with a call-girl scandal, but what makes this show so remarkable is that it’s not a guilty pleasure; it’s an actual pleasure.

By the end of it all, you’ll want to be best friends with CJ, fight with Toby, make out with Josh, hug Leo, and, of course, get a history lesson from President Bartlet. The West Wing will make you want to quit your job and join a think tank, or at the very least, vote in the next election. It will also help erase the memory of Sorkin’s ill-advised The Newsroom. Now log in and watch: it’s your civic duty. —Marisa Kabas

It’s hard to pinpoint another show whose aesthetic has imprinted so deeply upon a generation. David Lynch has always left his thumbprint on his films, but this 1990 series was unlike anything else on TV at the time. It’s an elaborately designed psycho-diorama sprung from Lynch and co-creator Mark Frost’s brains and placed on prime time; though it was disguised as a crime drama/soap opera, it ultimately unravels something more supernatural and possessed. True Detective felt like it was exploring the outskirts of Twin Peaks, but nearly 25 years later, no other show has matched its magic. The show’s scheduled for new episodes on Showtime in 2016, so start here and lather, rinse, repeat. —Audra Schroeder