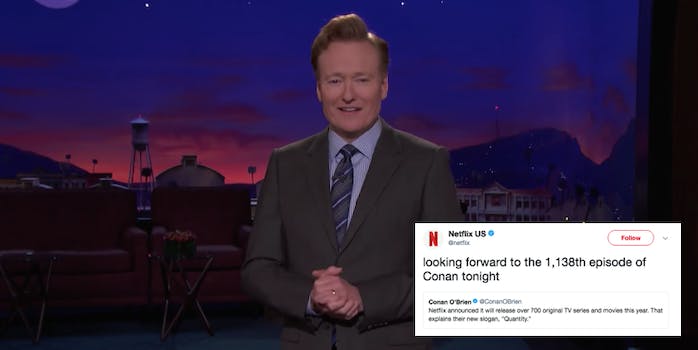 Today in unexpected celebrity beefs, Conan O’Brien and the Netflix corporate account got into it on Twitter after the late night host poked fun at the streaming giant’s content strategy.

It all started Wednesday afternoon when O’Brien tweeted out a monologue-style joke about Netflix. Back in February, the company announced it was eyeing a total of “about 700” new original series for 2018. O’Brien tweeted “that explains their new slogan, ‘Quantity.'”

Netflix announced it will release over 700 original TV series and movies this year. That explains their new slogan, “Quantity.”

It’s a play on “quality over quantity,” insinuating that there’s no way all 700 of these original series can actually be good, but Netflix begs to differ.

In a tweet Thursday evening, the streaming giant embedded O’Brien’s original tweet and included a message of its own: “looking forward to the 1,138th episode of Conan tonight.”

looking forward to the 1,138th episode of Conan tonight https://t.co/VZ04fAshoo

O’Brien’s TBS late night show has been on the air for 8 seasons.

Fans following both accounts seemed charmed by the zinger:

And for Netflix’s part, it has no apologies:

YOURE NOT EVEN MY REAL MOM