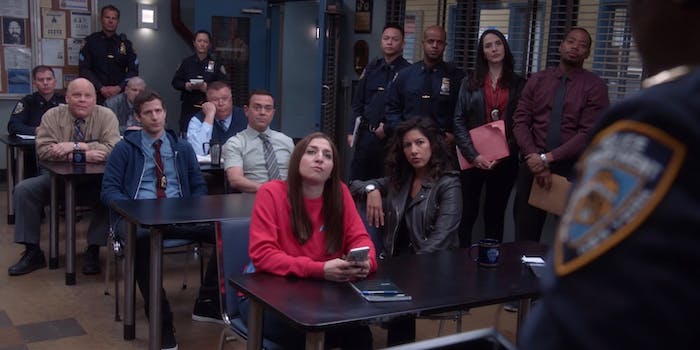 Hulu or Netflix may just save ‘Brooklyn Nine-Nine’

Networks have reportedly reached out to keep the canned Fox series on-air.

Brooklyn Nine-Nine was among the numerous shows to be canceled by Fox on Thursday, but amid the shock and outrage online there may still be hope for fans of the cult cop comedy. Just hours after news of its demise broke, Deadline is reporting that multiple networks and streaming services are interested in picking the show up for a sixth season.

Universal TV, which owns the rights to Brooklyn Nine-Nine, is reportedly receiving calls from Hulu, Netflix, NBC, and TBS about bringing the show back.

Ever since the revival of Arrested Development several years ago, fans have viewed streaming services as the saviors of beloved TV shows from cancellation hell. More often than not, it doesn’t work—at least not right away—but the success stories of The Mindy Project, Longmire, Community, and Gilmore Girls, among many others, demonstrate that it’s possible. And so, every time a beloved cult series is canceled, fans try. (We’re still crossing our fingers on Hannibal season 4!)

Brooklyn Nine-Nine fans late Thursday called for Netflix or Hulu to swoop in and save the show from its fate; even some of the show’s cast members urged fans to reach out.

Redeem yourself for The Get Down & Sense 8. Do it. Save the Nine-Nine! #brooklyn99 #JusticeforBrooklyn99 https://t.co/VN16G5Q9pF

"How to save Brooklyn Nine-Nine?" These are the top questions on #Brooklyn99 in the last day worldwide pic.twitter.com/BOQPPBatLP

With rallying cries from critics, fans, and celebrity viewers like Mark Hamill, Seth Meyers, and Lin-Manuel Miranda, it might already be working.

It’s not often that one network or streaming service—let alone four of them—expresses interest in saving a show. But the odds that Jake Peralta and the NYPD’s 99th Precinct live to fight another day are looking good.