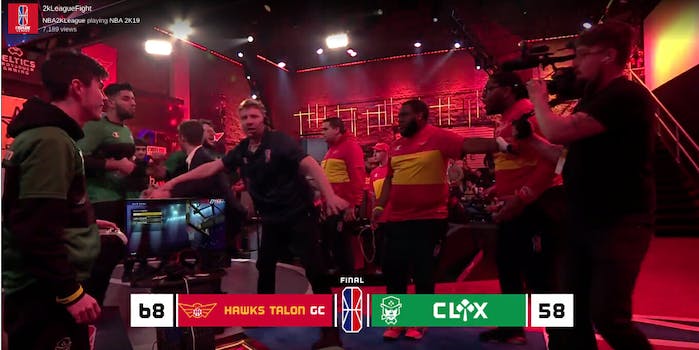 Things got out of hand.

Esports fans got more than they bargained for late Wednesday when a brawl broke out during an NBA 2K match.

The fight broke out between players from Hawks Talon and Celtics Crossover after an upset win by the Talons. After a Celtics player shoved someone from the other team, things got heated, and the situation had to be diffused by league staff. Clips of the brawl quickly began circulating online.

Celtics player Albano Thomallari shoved Randolph Moreno, from the Talons. When the teams gathered to shake hands after the match, Thomillari, who goes by oFAB when gaming, refused to shake Moreno’s hand. He then turned and pushed Moreno—who also goes by Rando—prompting teammates and league staff to intervene.

The NBA 2k League is the gaming branch of the NBA. All 21 teams are officially associated with a particular franchise in the NBA, which is why their names may look familiar. Each match is streamed to Twitch, where fans can gather to watch teams compete at the NBA 2k League studio. Each match has five players per team, and thousands of fans tune in to watch.

The Celtics made their league debut in 2018, where they placed ninth. This year was the Talons’ first and their first match of the season. The Talons won, 68-58.

The players have made little mention of the brawl online. No discipline is expected from the league, and there have been no announcements that any players or league staff were injured.