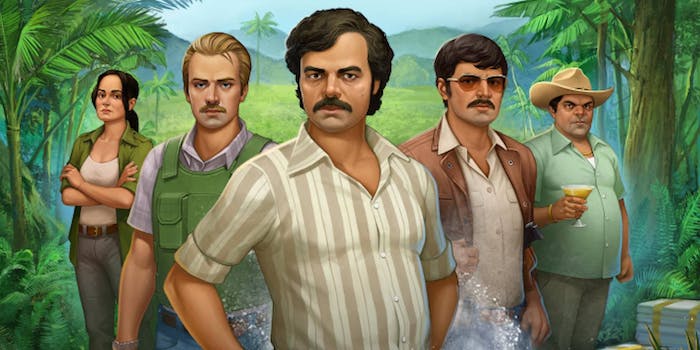 Roberto Escobar might not be thrilled with Netflix‘s depiction of his brother Pablo’s life on Narcos, but that isn’t stopping the streaming giant from monetizing the popular show.

The game launches in September, in tandem with the show’s second season, and starts players off as an up-and-coming cartel lieutenant. With help from the show’s characters, you’ll be able to build your organization from the ground up, and decide between leading through sheer power, gaining respect through loyalty, or using a combination of both. Players will have to form alliances in order to strengthen their cartels (and go to war over territory, profit, and respect).

In certain ways, it sounds like Grand Theft Auto with a dash of SimCity. And cocaine.

According to Aaron Berndtson, FTX Games’ head of business development, the app explores themes fans might be too distracted to notice while watching the show. “Narcos is about a lot more than violence, money, and power,” he said. “We really wanted to explore the moral ambiguity from the show, where right and wrong are subjective. We’re very excited to put these choices into the player’s hands.”

No official release date has been announced, but more information about the game is available here.