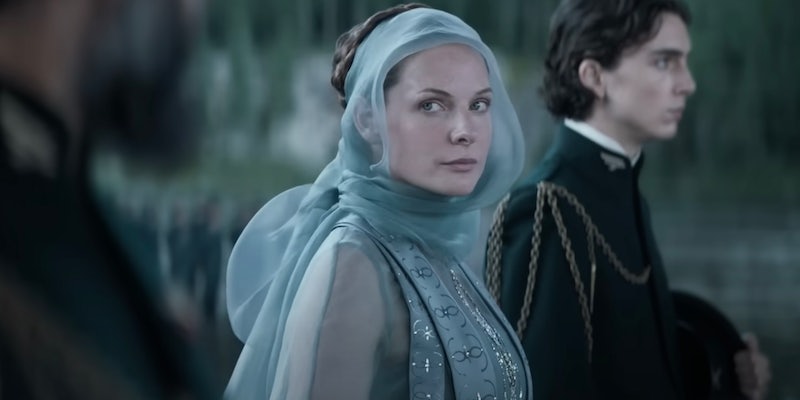 Does ‘Dune’ pass the Bechdel Test?

Science fiction films can be notoriously unaware of their female audiences, but recently things have been improving. There are many sci-fi fans who happen to be women. These fans want to see themselves represented as active characters who make an impact on the narrative — not passive bystanders who merely observe and remark on the adventures men are having. The world of Dune is fascinating because of the magical powers it affords women — and thus agency. But does Dune pass the Bechdel test?

What is the Bechdel Test?

Writer and artist Alison Bechdel popularized the Bechdel Test in her 1985 comic strip called Dykes to Watch Out For. Essentially, the Bechdel Test tests whether or not women are an active presence in film. It does so by asking three questions:

Later, more criteria were added: Is the conversation more than 60 seconds in length? And do the women have names?

This might seem like an incredibly low bar, but the Bechdel Test can be a useful tool for identifying gender inequality in movies. Something important to remember? Passing or failing the test doesn’t necessarily mean women are well-represented. Just because a work passes The Bechdel Test doesn’t make it a paragon of gender equality. This is just one tool we can use to examine the role gender plays in film and how movies represent women.

Background on female characters in Dune

Frank Herbert’s 1965 epic sci-fi classic was first translated into film by David Lynch in 1984. The most recent iteration, directed by Denis Villeneuve, hit the screen in 2021. The film tells many stories, but most notably it is a coming-of-age narrative about Paul Atreides. Paul is born into the royal House Atreides despite the fact that his mother, Lady Jessica, was not supposed to birth a male child.

Lady Jessica is a concubine and an acolyte of the Bene Gesserit, a group of women who have extraordinary mental and physical abilities. She’s been told she cannot give birth to a boy because of the Bene Gesserit’s strict breeding program instituted over centuries designed to create a Messiah. But Lady Jessica basically says, no thanks. She gives birth to Paul which disrupts everything and opens the potentiality for universal chaos.

Lady Jessica is an interesting character in a world populated by mostly men. She is a woman who possesses magical power and makes her own choices — even when they go against expectations. She is also a mother who loves her son and a partner who wants to protect her family. However, because of her position as a concubine, she has little to no political power. She spends most of her time focusing on her child.

In a move to augment Lady Jessica’s presence in Dune, Villeneuve expanded her role. “I didn’t want Lady Jessica to be an expensive extra,” he said in an interview with Empire magazine. “Something I deeply love in the book is that there was a strong balance between the masculine power and feminine power.”

Rebecca Ferguson, who plays Lady Jessica, also explained how her character has evolved. “She’s a mother, she’s a concubine, she’s a soldier,” Ferguson told Vanity Fair. “Denis was very respectful of Frank’s work in the book, [but] the quality of the arcs for much of the women have been brought up to a new level. There were some shifts he did, and they are beautifully portrayed now.”

Does Dune pass the Bechdel Test?

Critics have observed that Lady Jessica and the Bene Gesserit are evidence of the surprising feminism in Dune. And they are — kind of. After all, they’re a group solely composed of women who have superhuman abilities. They know hand-to-hand combat, can detect dishonesty, and are able to control minds. But they are basically in service of the royalty either as wives, concubines, or advisors. So it’s complicated.

In one scene, Lady Jessica and Shadout Mapes (a housekeeper for House Atreides and a member of the Fremen) have a conversation about a special weapon, called the crysknife. The crysknife has a blade made from the tooth of a sandworm. It is the weapon of choice for the Fremen. The tip of the knife is commonly poisoned, rendering this weapon exceptionally lethal. It’s also very sacred. Shadout Mapes presents the knife to Lady Jessica as a gift, and the two women speak to each other about the object.

So, according to the Bechdel Test, Dune gets a pass. Two women have a short conversation about a knife.

Perhaps in Dune: Part Two, scheduled for release in 2023, there will be more opportunities for women to engage with each other. After all, there was great fervor over Zendaya’s role as Fremen Chani, and we only meet her for a few minutes at the end of Part One.

Part Two of Dune explores Paul’s continuing quest to seek revenge against those who tried to destroy his family. As he and Lady Jessica team up with the Fremen, Paul and Chani become close — and Paul will have to choose between her and preventing something horrible from happening in the universe. But more than Paul’s quest, I’m looking forward to some great scenes between Lady Jessica and Chani.

Catch Dune on HBO Max and decide for yourself if it passes the Bechdel Test to your satisfaction: