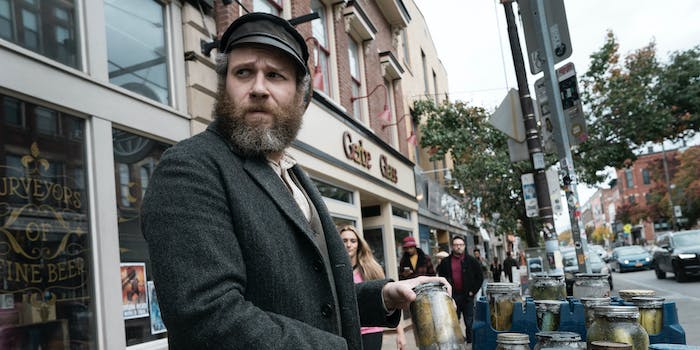 ‘An American Pickle’ examines the intergenerational depth of the American dream

The film focuses on a man who's brined for 100 years and wakes up in present-day.

Random chaos is all around An American Pickle. You wouldn’t expect anything less from its premise, which involves a Jewish ditch digger who falls into a vat of pickles in the early-20th century, where he’s brined for 100 years, and Seth Rogen pulling double-duty as both Herschel Greenbaum (the aforementioned brined man) and his great-grandson Ben in 21st-century Brooklyn.

It shouldn’t work at all, and at times, it doesn’t; the plot is thin, fairly predictable, and it loses its focus multiple times throughout the film, which is written by Simon Rich (and adapted from a short story he wrote). But what it lacks in coherency it makes up for with two great Rogen performances and an unexpectedly poignant message about family and legacies.

For Herschel, the legacy of what lies ahead looms large. We first meet him in Sclupsk (a fictional Eastern European country) as he spends his days digging ditches with wooden tools that easily break on him and attempts to woo Sarah (Succession’s Sarah Snook, who has very little to do), a woman who “has all her teeth, top and bottom.” They eventually bond over their favorite color (black), the fact that their parents were murdered by Cossacks, and their dreams: Herschel wants to drink seltzer water while Sarah wants to buy her own gravestone.

When they get to America, Herschel makes his living killing rats at a pickle factory and gets that gravestone for Sarah while he puts his seltzer dreams on hold; after Sarah becomes pregnant, they imagine what their descendants would accomplish in 100 years.

Pulling a Rip Van Winkle by way of a condemned pickle factory—the exact science which is largely handwaved away—Herschel gets to see exactly what one descendant has been able to accomplish. And that’s Ben, a freelance app developer who lives in a spacious Brooklyn apartment and spent years perfecting his idea for an app. Herschel wants to grieve the family he’s lost while Ben wants to mourn in his own way; when Herschel learns that Ben’s parents died, he asked if it was “murder or regular” and wants to know all of the gruesome details. Herschel keeps looking ahead while Ben keeps looking behind.

It’s a class of old versus modern and fish-out-of-water in more ways than one. And while they initially get along well, a rift grows between Ben and Herschel, leaving Herschel vowing to make a fortune selling pickles largely to spite Ben.

You don’t need to sit through the entire film to figure out where it’s going. Herschel and Ben’s strive to achieve some version of the American dream each comes with its own ups and down; for the former, who ends up going viral thanks to a hipster vlogger who thinks Herschel is an artisanal pickler, it’s often played out to humorous effect. Along the way, it tries to say something about everything from self-worth and capitalism to cancel culture and just how unpalatable views that might’ve been commonplace 100 years ago largely wouldn’t fly now. Your great-grandparents would likely be just as unrecognizable to you as you would to them.

An American Pickle’s immersion isn’t grand enough to make you believe that two different people are inhabiting those roles, but Rogen makes Ben and Herschel feel like they’re two completely separate characters with their own respective quirks, both of which feel kind of refreshing. (Although the script spends more time developing Herschel than Ben.) The downside to that is that once you shift the focus to the world outside of the Greenbaum family feud, it starts to feel paper-thin.

At its heart, An American Pickle gets deeply sentimental about the intricacies of its own intergenerational relationship and the kinship they find in one another that prevents it from completely souring. You just have to let it sit and brine for a bit.